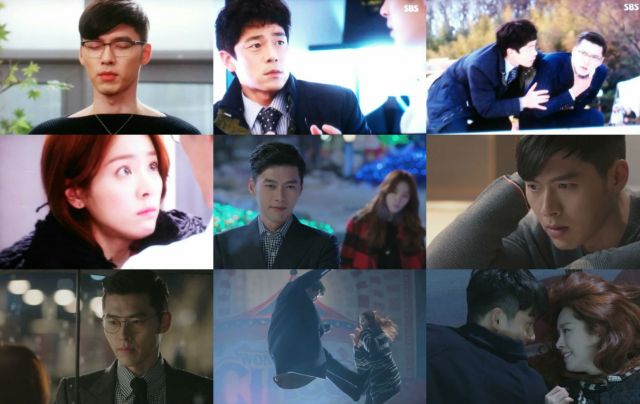 While watching the first episode of "Hyde, Jekyll and I", mentally I frequently found myself wondering how exactly this drama was pitched. It's less a coherent product than a bunch of apparently random fashionable tropes. Hyun Bin is in it, so let's use a concept vaguely similar to "Secret Garden". Product placement is popular, so let's set it at an amusement park. Dramas about mental illness are in vogue, that's good. Also "Mr. Go" is on retainer, so either we put him on screen somewhere or he'll just be a drain on the budget.

It's really not a good sign when a drama starts out with a dream sequence- and everything following the dream sequence is only barely more coherent. Heo-jin's mental illness, coupled with his introduction in an outrageously luxurious home, makes "Hyde, Jekyll and I" seem more like science fiction than an actual romantic comedy. In all fairness we don't actually have a romantic comedy yet, since Robin is only introduced right at the end.

I hope he starts showing up more soon. Right now the only remotely interesting hook in this drama is the idea of an evil jerk having to obsessively self-medicate his endorphin levels or else he'll turn into his heroic alter-ego. OK, that's actually a pretty excellent concept, but until just now I didn't even realize that's what the drama's actually about because the first episode spends almost all of its runtime being really, incredibly weird and uninteresting. As obviously unrealistic as the entire premise of the drama is, most of the actual plot revolves around contract negotiations.

Irritatingly, Hyeon-bin isn't even a very good villain on this front. At some point it seems like somebody would try to call a lawyer. Then again this isn't a drama that seems particularly interesting in coherent logic. Let's take the entire sequence at the abandoned mental health center. No, it's not literally abandoned, but as far as I can tell there are only five people in the entire complex. How does that even work? Two days in a row now I have to apologize for being mean to "Pinocchio"- at least the buldings in that drama had other people in them.

Back to "Hyde, Jekyll and I"- the bigger problem here is just that the product's so unpleasant. Even the music mostly just gives me a headache, in part because it's trying too hard. Hard-hitting crisis soundtrack! Lovable amusement park soundtrack! Ominous thriller soundtrack! All the drama's doing so far is calling attention to the fact that it's trying way too hard to do too many genres very badly. The only sliver of hope I have right now is that Robin somehow at least manages to pull a compelling romance out of all this.

"[HanCinema's Drama Review] "Hyde, Jekyll and I" Episode 1"
by HanCinema is licensed under a Creative Commons Attribution-Share Alike 3.0 Unported License.