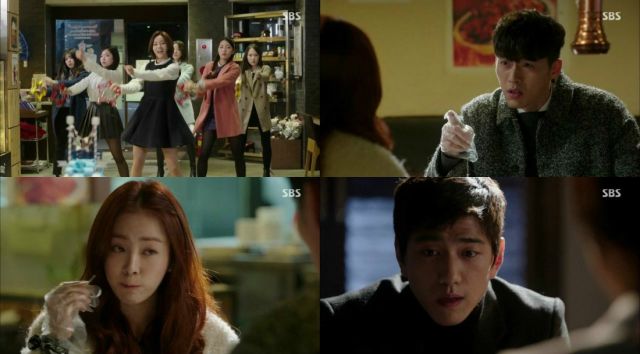 This episode's surprisingly drawn out considering almost the entire runtime is just dedicated to Tae-joo's deranged revenge scheme. Sung Joon puts in a pretty good performance here. The man might be crazy, but he's crazy in an extremely logical way, and it's fun watching him stare at Seo-jin and Robin with just a kind of perplexed expression. Even though Tae-joo's desire for revenge is no less than it was before, at this point he's at least curious enough to see how this all plays out.

While the whole thriller set-up is rather extreme, it does go a long way to promoting Seo-jin's character development. His attempt to hide behind Robin ultimately fails, forcing Seo-jin to accept responsibility for his own actions and at least try to do the right thing. Notably, he still needs Robin to do the actual work- but there's now a kind of symbiosis in the relationship that was lacking before.

As for Ha-na, well, she's still just Ha-na. The romantic elements of "Hyde, Jekyll and I" are mostly absent here, though, as Ha-na simply acts like a good person, doing whatever she can to help people she sees in danger. It's a kind of middle ground between Seo-jin and Robin really- as Seo-jin so excellently puts it, being super heroic isn't necessarily a good thing. Which come to think of it is definitely one good reason to keep Robin under wraps.

While the general unity of vision here is nice, the main problem with this episode is that very little actually happens aside from the confrontation with Tae-joo. Pretty much the entire rest of the supporting cast is sidelined here except to the limited extent that they're able to react to Tae-joo's scheme. Even the cliffhanger, while rife with potential in regards to Seo-jin coming to grips with his emotional issues, is just an outcropping of those earlier issues.

But I'd really prefer not to nitpick. I'll gladly take a well-produced episode with few very important plot points over ones with several mostly irrelevant ones. "Hyde, Jekyll and I" still suffers somewhat from an iffy foundation, but those of you who have actually enjoyed the drama from the start will find plenty of intriguing material here in regards to character development and exploration. This is how you produce serious dramatic stakes- even if we know nobody's actually going to die here, it's the sacrifices they have to make to survive that keep the proceedings interesting.

"[HanCinema's Drama Review] "Hyde, Jekyll and I" Episode 10"
by HanCinema is licensed under a Creative Commons Attribution-Share Alike 3.0 Unported License.