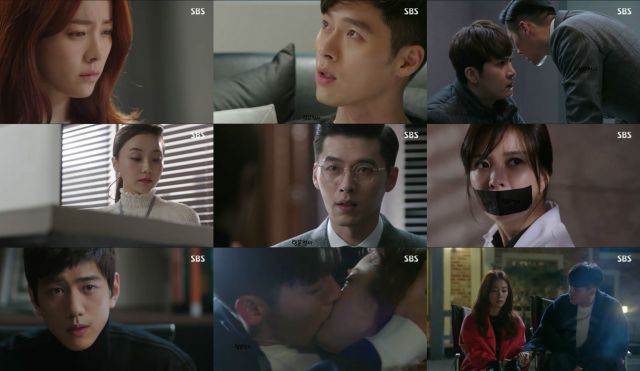 Tae-joo has progressed from physical deathtraps to mental ones. It's an intriguing change of pace actually. Tae-joo has, just like us, witnessed Seo-jin going through undeniable character development. But Tae-joo is unwilling to admit that Seo-jin's mental state may be complicated somehow- so he instead comes up with rather elaborate logical justifications by which Seo-jin can still be the bad guy. And therefore, Tae-joo can still have his just revenge. No wonder Hee-ae looks so panicked. There's two mental patients at risk of relapsing here- three if you count Robin.

What makes the situation particularly ironic is that the only reason Tae-joo has a shot at this kind of revenge in the first place is because both Seo-jin and Robin have taken these recent revelations seriously, and end up approaching Tae-joo for help. I particularly like the somewhat perplexed look Tae-joo gives off upon listening to their stories. It's almost like they're trying to dissuade him, even though neither Seo-jin nor Robin know who Tae-joo really is.

Ha-na, unfortunately, doesn't have all that much to do here. That's the one problem of "Hyde, Jekyll and I" suddenly turning into a fairly engaging psychological thriller. It leaves relatively little time for romance except as directly relates to the current ongoing dilemma of who Seo-jin and Robin are. The same person, or two different people? As the flashbacks show, the case for their being two completely different people is actually quite persuasive- to the point that Ha-na really has trouble coping.

The worst of it, though, is that at this point Seo-jin's very own character development now appears to be what's putting him in the greatest danger. There was never any existential threat to either Seo-jin or Robin as long as Seo-jin's latent psychological issues were buried. It's only now that he's chosen to confront these issues that Seo-jin is in serious psychological trouble. I have to say, as obviously extreme as this storyline is, that's actually quite the effective metaphor for mental illness.

Even if not necessarily great, "Hyde, Jekyll and I" is still doing a good job continuing its streak of remaining mostly engaging, interesting, and well-plotted. It bares increasingly little similarity to the early episodes, which were more wacky for the sake of being wacky, and consequently, there's not as much here in the way of interesting visuals. That just seems to be the trade-off we get, though, for the sake of compelling performances in the service of analytical psychological drama.

"[HanCinema's Drama Review] "Hyde, Jekyll and I" Episode 11"
by HanCinema is licensed under a Creative Commons Attribution-Share Alike 3.0 Unported License.