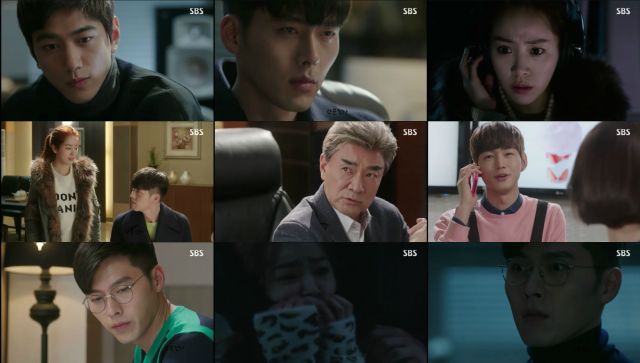 The police in this drama really aren't very competent. I haven't felt it necessary to discuss that aspect so far since there's so much else going on, but it's kind of unavoidable here. Tae-joo inexplicably manages to make a getaway and further his psychological schemes even longer. Which is unfortunate. While the whole Tae-soo story arc has certainly been interesting it definitely drags here, making me wish "Hyde, Jekyll and I" had at least one other meaningfully built up subplot.

Sung Joon still puts in a pretty decent performance, at least. Tae-joo finally gets the face-to-face confrontation with Seo-jin that he's always wanted...and is once again forced to retreat into logical tangles when Seo-jin's memories prove inconvenient. Now that Hee-ae is out of the picture, Tae-joo is mostly forced to just try and argue with himself. It's a losing argument mainly because Tae-joo knows that he's cheating.

The main character triumvirate of Seo-jin, Robin, and Ha-na manages to be much less intriguing though, mainly because their character arcs are more-or-less done. While we still haven't resolved the main problem of whether Seo-jin or Robin has to disappear...well, that doesn't really come up actually. I can see why it took so long for Tae-joo to be outed as a villain. There's not really enough plot there to sustain an entire drama, and even now "Hyde, Jekyll and I" is very much running out of ideas.

The supporting cast, for example, are such blatant non-entities here it's practically a joke. I'm not sure why Seung-yeon keeps showing up in random scenes- my best guess is that Han Sang-jin is obligated by contract to appear at least once per episode. Bear in mind that it's possible all these extraneous characters are going to be relevant somehow to the final resolving climax that we're presumably going to get next week- but I kind of doubt it.

While not as bad as the earlier episodes "Hyde, Jekyll and I" is definitely in a weak place logically. For the entire cliffhanger, I was just left wondering, whatever happened to the huge security team that exists solely to keep Robin in line? I'm guessing writer Kim Ji-woon-II simply forgot they existed- an easy enough thing to do, since they completely disappeared once Seo-jin and Robin made the time share deal way back when. While this is a forgivable oversight, it really does emphasize the various weaknesses that have plague this production.

"[HanCinema's Drama Review] "Hyde, Jekyll and I" Episode 14"
by HanCinema is licensed under a Creative Commons Attribution-Share Alike 3.0 Unported License.