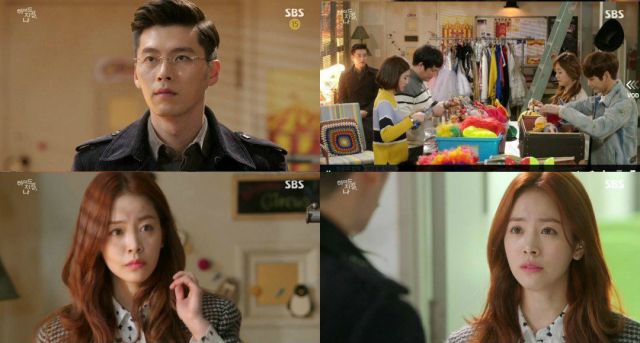 So...last episode was the big climactic psychological brawl between Seo-jin and Tae-joo. Now that that's been resolved, what is this drama about exactly? To be entirely honest, I was kind of expecting this to be the last episode where everything just sort of wraps up, having forgotten that "Hyde, Jekyll and I" is in fact a twenty episode drama. In that light, it would seem we're heading into extended wrap-up mode.

Still no circus, I'm afraid. I'm really just going to be incredibly annoyed if this drama manages to finish up without ever actually letting us watch the circus at all. Come to think of it "Hyde, Jekyll and I" has been pretty scarce on the whole amusement park element lately too. We do get a sweet flashback with little Seo-jin and little Tae-joo looking out for each other, and it's here that we get to the only real plot thread the drama still has- the fact that Seo-jin doesn't have any friends.

As uneven as the drama has been regarding Seo-jin's character that much does hit a certain soft spot for me. Seo-jin's problem from the beginning has always been the fact that he's an unpleasant man who has no friends, and who's only just now coming to realize that a lack of friends actually kind of sucks. It's kind of funny watching other characters not really sure what to do with him- everybody knows and accepted that that Seo-jin is crazy, but apparently the notion of him being lonely is just sort of beyond the pale.

While this is all somewhat interesting, I do have to be honest on one point. "Hyde, Jekyll and I" is, in fact, kind of boring. It's not boring in the same way that "Blood" is boring- I at least don't have to struggle to stay awake during "Hyde, Jekyll and I". But now that we're out of high-stakes action, I'm once again reminded of the drama's more substantial flaws- like a supporting cast whose role is, for the most, rather poorly defined.

Still, at least I'm not as pessimistic now as I was earlier in the drama's run. At the very least "Hyde, Jekyll and I" does have a few interesting ideas still floating around. Whether we'll actually see much good use made of these is completely up-in-the-air. At the very least we need some sort of conflict- hopefully something on the more personal level, since in terms of physical drama it's pretty hard to top a hostage situation.

"[HanCinema's Drama Review] "Hyde, Jekyll and I" Episode 16"
by HanCinema is licensed under a Creative Commons Attribution-Share Alike 3.0 Unported License.