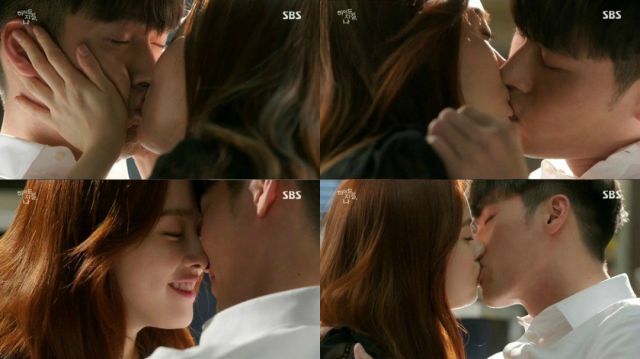 Up until this episode, the tacit understanding has been that Seo-jin is the real person and Robin is the interloper. But Ha-na's declaration flips all of that on its head- now everybody thinks that Seo-jin is just a facade put on the for sake of the family corporation, and that Robin is the real dominant personality. It's a turn of events that would have driven Seo-jin insane at the start of "Hyde, Jekyll and I". But bizarrely enough, here, he actually seems kind of happy about it.

That's because, for the first time in a long time, people want to talk to Seo-jin, and after the lonely moping of the last couple of episodes, Seo-jin is more than willing to accept attention from anyone. Seo-jin doesn't even seem to care whether or not he has a life anymore. If he can just be that guy, cheering Robin on from the sidelines, that's OK. The climatic scene at the radio station perfectly exemplifies this. Seo-jin is satisfied just being able to share in Robin's obviously fulfilling life. He doesn't even want anything in return.

But in the long run Robin is, in fact, the illusion. And even though his dreams have come true to an unbelievable extent, Robin can't help but sulk thinking about how this is all going to have to end. The relationship between Seo-jin and Robin has developed quite impressively- they've gone from being diametrically opposed to having genuine sympathy for one another. I suspect this rapport is what's ultimately going to factor into the ending.

The other characters feel rather well-rounded too, as they're similarly forced to come to terms with what they really want in life. My favorite example of this Seung-yeon. Once again his evil plan has failed spectactularly, but the best part is watching him stew about angrily for being so ineffectual. The big joke here is that Seung-yeon doesn't actually need to play the role of villain at all. Seung-yeon could have a happy ending too, if only he would just look around.

There's something very comforting about "Hyde, Jekyll and I". The big problems haven't gone away, but there's a very clear sense here that life can be lived fulfillingly on a day-by-day basis just so long as we pay attention to the small victories. That's what Seo-jin has learned here- ironically enough it's a lesson he actually took from Robin, who right now seems incapable of appreciating his own life lessons. That's really just how it goes though- the more you think you have, the more scared you are of losing it.

"[HanCinema's Drama Review] "Hyde, Jekyll and I" Episode 18"
by HanCinema is licensed under a Creative Commons Attribution-Share Alike 3.0 Unported License.