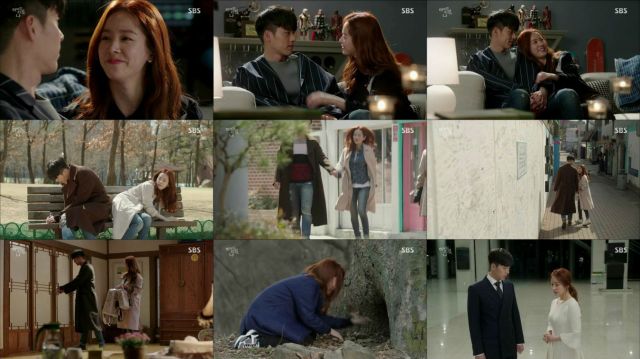 The tone this episode moves toward deathbed melodrama of all things. It's not exactly unprecedented. "Hyde, Jekyll and I" has been pretty consistent about treating Robin as if he is his own person, and not just an extension of Seo-jin's personality. And even if Robin himself is willing to accept that premise, that doesn't make the oncoming reality of his own "death" any less painful to bear. Nor does it make matters easier for Ha-na.

It does take some time for Ha-na to realize what's actually prompted Robin's romantic idea. And the solution on her end is...well, pretty classic melodrama. I need to emphasize here that I'm not trying to be insulting. This episode is a melodrama in the same sense that a movie like "Snow in Sea Breeze" is melodrama. The whole affair is obviously unfairly and manipulatively sad, but that's the whole point. It's not like writer Kim Ji-woon-II just pulled all of this out of nowhere.

Consequently, the extent to which you'll like this episode will probably depend on your willingness to tolerate melodrama, as well as your general appraisal of the Ha-na / Robin relationship. The cliffhanger definitely looks to be a send-off of their romance- Seo-jin is barely a presence here at all except to the extent that he's technically the force that's provoking Robin's destruction.

Ever since the big dramatics involving Tae-joo were concluded, "Hyde, Jekyll and I" has been all about resolution and coming to terms with a world that will probably be better than the one Seo-jin and Robin already had, but they really have no way of knowing for sure. And I think that's what the real purpose of this episode is- closure. Both for Ha-na and for Robin. From a narrative perspective this is technically just a convenient way to close off the love triangle- but the emotions are sincere enough that the episode never really comes off that way.

Just as a matter of personal taste, I don't particularly like or dislike classic-style melodramas. Nor, for that matter, have I been particularly invested in Robin as a character except as he relates to Seo-jin. Even so, this episode is generally well-done and will probably give all the Robin fans out there plenty to appreciate. If nothing else, I have to admire that, as of yet, "Hyde, Jekyll and I" has not foreshadowed any kind of obvious cop-out to the world-building established so far. Just because this is Wonderland doesn't mean there's going to be a fairy tale ending.

"[HanCinema's Drama Review] "Hyde, Jekyll and I" Episode 19"
by HanCinema is licensed under a Creative Commons Attribution-Share Alike 3.0 Unported License.