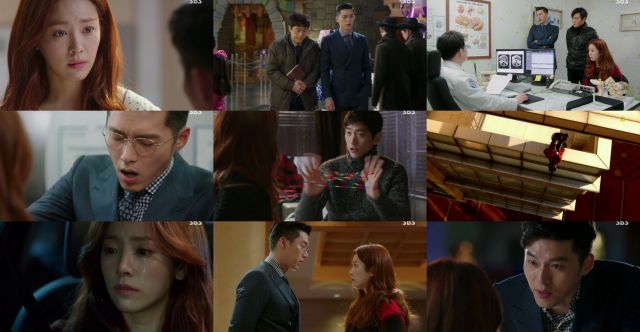 Why did it have to be a criminal invesigation? I'd just as soon pretend the entire final sequence of the first episode didn't happen, but that's pretty much impossible when "Hyde, Jekyll and I" is outright insisting on turning the invasion and attack into a serious plot point. Much is made of the missing cameras, but what about the missing people? No one saw this guy come in? There wasn't a guard? How do we go from a completely filled lecture hall in the middle of the day to absolutely nothing?

The character of Ha-na (played by Han Ji-min) has also gotten rather perplexing. Before I just thought she was a woman who loves magic, has a pet gorilla, and is mostly concerned with making sure the business practices of her circus run well. While that's certainly bizarre, it's at least comprehensible. Now she's a material witness in...what exactly? Just a missing person case, or some sort of elaborate conspiracy involving mental patients?

I get the impression the perplexing twists the story has taken are intended to whet viewer interest. The reason it's not working is that this drama has completely failed to establish a baseline. What exactly is considered normal in this world? Do bizarre assassination attempts happen all the time? Is that why everyone is so blasé about what's going on? Is director Jo Yeong-gwang just not establishing proper mood? Or has writer Kim Ji-woon-II so completely gone off the deep end that he's not even sure what kind of story she's trying to write?

Even the more mundane aspects of the drama beg more questions than answers. Why exactly does Ha-na want such a long term contract? Don't circuses normally travel around? And since the nature of legal agreements has been brought up, I'd think that failing to properly restrain their gorilla would in itself be grounds for termination. Again, it's almost impossible to guess which aspects of the worldbuilding in "Hyde, Jekyll and I" are important because everything is equally implausible, but some implausible bits are arbitrarily being treated more plausibly than others.

The only positive point in the drama, once again, is Robin. I like the idea of Robin. He's a superhero hiding in the body of a supervillain, which to the best of my knowledge is not an interpretation of the Jekyll and Hyde story that's ever been attempted before. It's just, this concept would be a lot more intriguing if there were some actual coherent stakes involved. Two episodes in, and I'm still not sure on a basic level what any of these characters actually want.

"[HanCinema's Drama Review] "Hyde, Jekyll and I" Episode 2"
by HanCinema is licensed under a Creative Commons Attribution-Share Alike 3.0 Unported License.