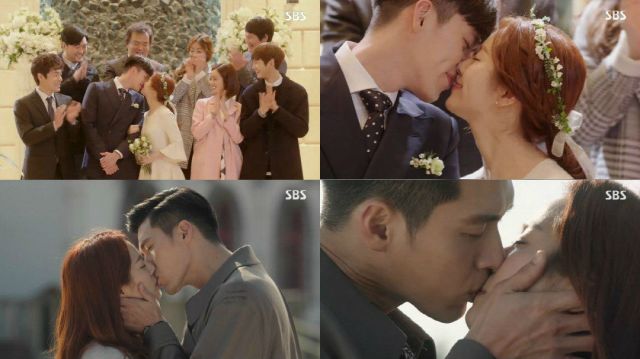 The marriage ceremony at the beginning of this episode is an obvious symbolic representation of how Seo-jin and Robin will inevitably merge- it's the spiritual idea of two people becoming one. This notion has been alluded to a lot in the script lately, and it's here that "Hyde, Jekyll and I" finally pulls this idea off. There's only really fireworks in the literal sense. The main important aspect of the presentation here is subtlety.

As has been implied, Seo-jin does end up retaining Robin's skills and memories. But Seo-jin is still without a doubt the dominant personality- we don't see anything of Robin except to the extent that Seo-jin can utilize Robin's abilities. Seo-jin has to make a deliberate, conscious effort to invoke Robin- which means that if he wanted to, Seo-jin could pretend like the Robin phase of his life never happened. All it would take is a visit to the psychiatrist to wipe these residual memories out for good.

But that's how Seo-jin has changed over the course of this drama. Seo-jin has gone, metaphorically, from resenting himself and his past failures to accepting the fact that he is a flawed human being, and that Robin is an extension of that. The feelings Seo-jin expresses to Ha-na here don't come from the depths of loneliness, but rather from his realizing that she's in pain and that he's the only one who can help her move on from that.

To some extent this is admittedly kind of creepy, or even worse, boring in presentation. So whereas the previous episode (and the beginning of this one) largely correlated to how the viewer felt about Robin, this one deals with the viewers feelings toward Seo-jin. It might have been a bumpy path but throughout the second half I honestly had a very easy time identifying with Seo-jin's struggles. Love represents a change for him less because of Ha-na as it is a matter of Seo-jin learning to love himself- to embrace and accept Robin, and Robin's own feelings toward Ha-na.

Naturally this doesn't really do much to assert Ha-na's agency. And as far as the complaint department goes, we never did get to actually see the circus in action. But I think that accepted on its own terms "Hyde, Jekyll and I" did manage to turn out somewhat decently by the end. While this is no literal documentary for Disassociative Identity Disorder the metaphor for mental illness, as well as its causes and curses, is an apt one. On balance I ended up generally liking this drama, although admittedly this had relatively little to do with its merits (or lack thereof) in the romantic comedy department.