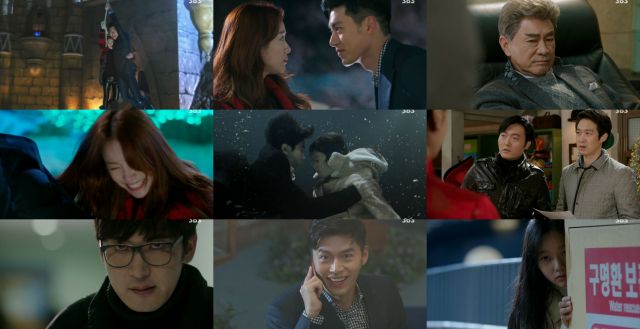 All right, I'm on to this drama. Ha-na exists less as a character with her own distinctly designed motivations as she does a plot device intended to provoke Seo-jin's conflict with Robin. In terms of spectacle Ha-na is also important because two people are necessary to have bright colorful escapades around an abandoned amusement park. There's an awful lot of stuntwork here for a drama that's allegedly supposed to function largely as a romantic comedy.

It's cute, for what that's worth. Hyun Bin as Robin is a pretty charming guy- but he's also quite literally a fantasy, not a real person. Which makes it all the more weird when the security team calms down and all of a sudden everybody's negotiating with the guy. Even Seo-jin manages to get in to a fairly lengthy discussion with his alter ego. Evidently the political situation is rather complicated, so we're probably not going to get anyone trying to destroy Robin with shock therapy or something.

I appreciate "Hyde, Jekyll and I" taking a moment here to clearly flesh out the actual premise. I note with some irony that if Seo-jin had been more willing to negotiate over the circus' initial demands he probably could have gotten Ha-na out of his park and evaded this entire unpleasant conflict. The obvious lesson to take from all this is that Seo-jin can't solve his problems by being a jerkish bully. And Seo-jin has receieved this message, albeit rather unwillingly.

While the stakes involving Robin are clearly defined most of the rest of the drama remains a mystery. In the case of the man in black, motivations are kept vague for good reason. But the importance of Seung-yeon (played by Han Sang-jin) is a lot more unclear. He doesn't actually seem to be aware of the Seo-jin / Robin situation at all, which seems rather odd given that the entire security team has to know, by necessity. So far there's no obvious reason for his character to exist at all.

This episode still involves its fair share of silly tropes- but now the action is subdued enough that the proceedings aren't too obnoxious. The sound design also benefits from much more solid focus- the only emotion given serious attention here is romance. While I can't exactly recommend a drama based solely on its ability to run effective product placement for an amusement park, these scenes are at least enough to keep "Hyde, Jekyll and I" tolerable. For the moment anyway.

"[HanCinema's Drama Review] "Hyde, Jekyll and I" Episode 3"
by HanCinema is licensed under a Creative Commons Attribution-Share Alike 3.0 Unported License.