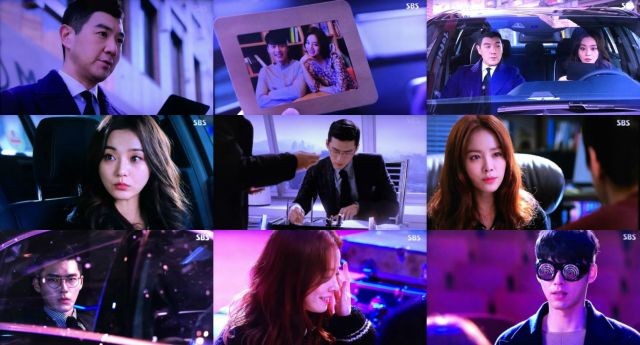 Seo-jin still hasn't learned his lesson. Once again the man tries to solve his problems by fiddling around with contract negotiations. To be entirely honest I'm sick of all the contract discussions, so I'm hoping the end of the episode honestly foreshadows that Seo-jin is going try to find another way to deal with Ha-na. There's just something terribly annoying about this drama having something as interesting as a circus only for us to never actually to get watch a circus performance.

I do find myself warming up to the idea that the more fantastical romantic sequences with Robin are, in fact, intended to be dream-like and unrealistic, and that this is the main reason why "Hyde, Jekyll and I" is set at an amusement park. Even though these aren't particularly unusual stunts they look rather blatantly ridiculous. Observe Ha-na simultaneously sitting and bouncing on the trampoline. I know you can do that on any trampoline big enough to support at least two people but it's just so silly.

Contrast this with the more serious discussions. In spite of her inaccurate information, Ha-na manages to get in a pretty good jab on Seo-jin regarding the cowardly nature of his character. In terms of direction the argument is only bolstered all the more by the fact that the scene takes place in an aquarium. Even if Seo-jin didn't actually try to kill himself, mentally, the man is still underwater.

Even granting the drama this much credit, other story points remain dubious. Woo-jeon (played by Hyeri) finally makes an appearance, and it's scenes like this, where Robin is recognized as an actual person, that give me mild conniption fits regarding continuity. Robin only works as a metaphorical expression of Seo-jin's id as long as he remains unacknowledged. And yet "Hyde, Jekyll and I" appears to be moving toward Robin's public exposure turning into a huge plot point.

I'm still not completely sold on "Hyde, Jekyll and I" as an overall product. This is feeling more and more like a drama that requires note-taking in order to keep proper track of which story points are supposed to be metaphorical and which are supposed to be tangible. The confrontations between Hyun Bin and Han Ji-min remain a strong point, though, and if we really are done with the contract negotiation plot point, there will be plenty more opportunities for the drama to showcase the chemistry between these actors in the future.

"[HanCinema's Drama Review] "Hyde, Jekyll and I" Episode 4"
by HanCinema is licensed under a Creative Commons Attribution-Share Alike 3.0 Unported License.