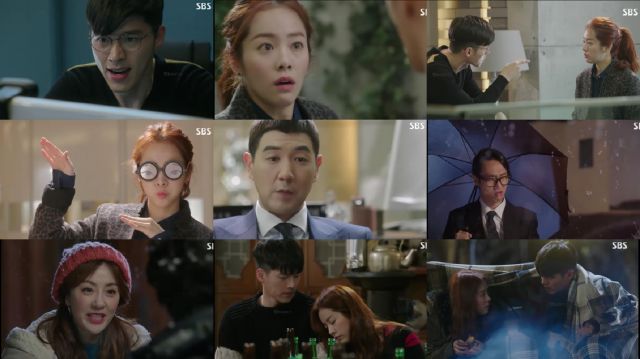 Disappointingly, very little of this episode actually takes place inside the house, as most of the runtime is dedicated to Ha-na and Robin going out on dates. In a sort of counter-intuitive way, "Hyde, Jekyll and I" is mainly managing to explain why these kinds of cute romantic moments really need better context in order to function correctly. Seo-jin is the only character involved in any actual plot, and his main motivation is just to avoid contact with Robin.

Incidentally, by now it's pretty obvious that the mysterious man's motivation isn't actually to hurt Seo-jin or Ha-na. He's just trying to provoke Robin into showing up for reasons unknown. The way Seung-yeon is consistently portrayed as being ignorant of the entire situation is particularly annoying in this context. The plot as a whole would have a lot more dramatic urgency if there was some kind of conspiracy to use Seo-jin's mental illness to bring down the amusement park.

Although on that note maybe there is and we just don't know it yet. I'm getting mildly interested in Ha-na's hypnotherapy sessions if only because here they remind me a lot more of the Doctor Frost webtoon than anything in the actual "Doctor Frost" drama. There's a white room and portraits. Which doesn't seem like much but if you've seen the "Doctor Frost" drama you know that's a pretty low bar to clear.

This episode as a whole manages to just barely meet expectations. The Ha-na / Robin romance is passably cute. The appearance of Woo-jeong also allows for some mildly amusing jokes regarding jealousy, and the reasonable foundations thereof. The twist that appears mid-episode isn't quite as fun as it seems at first, because it seems like the logical thing for Seo-jin to do in this situation is make an excuse about not feeling well and just go home. Surely sleeping pills would be on-hand for an emergency such as this? Or is that not how the rules work?

Honestly, I wouldn't be discussing the rules at all if the drama was just more exciting somehow. There's not even much in the way of visuals here, what with so much of the episode taking place at night. Right now the operating plan for "Hyde, Jekyll and I" seems to be just having Hyun Bin carry the day on the force of his own charisma. It's not working. As much as I appreciate the turn for logically consistent writing a drama really needs more than that to actually be interesting.

"[HanCinema's Drama Review] "Hyde, Jekyll and I" Episode 5"
by HanCinema is licensed under a Creative Commons Attribution-Share Alike 3.0 Unported License.