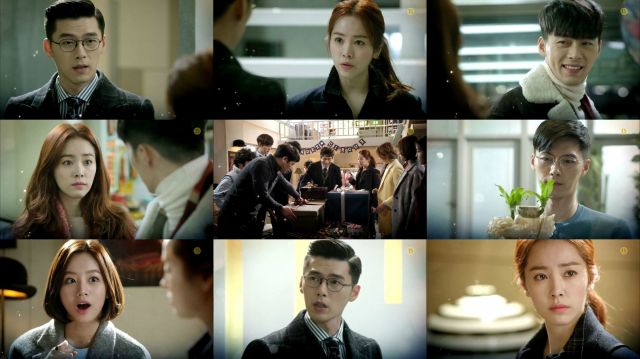 So now Seo-jin's motivation is to...help the circus out? I guess that works. It has very little to do with anything he's done so far but whatever. At least he has a goal now. Too bad the other characters still hate the circus for some reason. I mean, geez, you let just one gorilla out on a murderous rampage, and all of a sudden nobody wants to honor their contracts! Likewise, while it's nice to see some actual villains, it's also way too easy to see things from their point of view.

The action thriller plotline also gets some much-needed definition as we finally find out why...actually we don't find out why Ha-na specifically was the target. We just get the motivation explained in broader strokes. I'm still not terribly thrilled with the way "Hyde, Jekyll and I" has decided to cram all of these disparate tonal elements into the same drama. Even so, credit given where credit is due- the story at least mostly makes sense now. Which makes it much easier to focus on the love triangle.

The Seo-jin / Robin perspective underwent a slight flip last episode that's pretty much completed here. Now Seo-jin is the guy who's genuinely being nice and helpful, while Robin is being clingy, needy, and all-around just kind of annoying. It's no wonder Ha-na's a little perplexed about all of this, because the change in their attitude has nothing to do with her. Seo-jin feels affection for Ha-na because she's the means he can use to get back at his alter-ego. And Robin is freaking out, not because he thought Ha-na was moving too fast, but because Seo-jin has discovered his secret weakness.

It's interesting thematic territory somewhat let down by the fact that there's very few interesting visuals here. The puppet show was pretty good. As for the circus itself, it's practically becoming a running joke at this point that we never actually get to see them do circus stuff. It's just legal wrangling and contract negotiations. And yes, I appreciate that real-life circus acts, especially in the modern day, have to go through lots of paperwork. That doesn't make it any more fun to watch.

Other characters also remain largely undefined. I'm really hoping the whole "Woo-jeong acts young and sexy while men ogle her" thing isn't going to be a running thing, because I honestly just feel uncomfortable watching that. Beyond this, her only apparent purpose in the plot is to randomly overhear conversations, and sometimes report to other tangential characters the reports of her sneaky listening. Not exactly inspiring material.

"[HanCinema's Drama Review] "Hyde, Jekyll and I" Episode 7"
by HanCinema is licensed under a Creative Commons Attribution-Share Alike 3.0 Unported License.