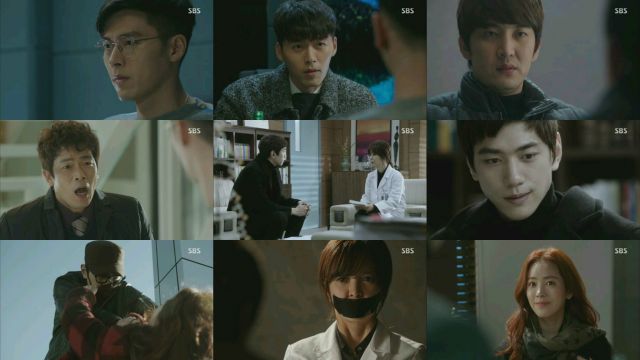 The mystery inexplicably becomes the most interesting part of the drama this episode. The answers we thought were so clearly delineated at the cliffhanger quickly become complicated by a glaring inconsistency in the suspect's story. "Hyde, Jekyll and I" manages to take story cues from "Doctor Frost" of all places, and quickly proves that it was the latter drama's execution of the elements that fell flat. As it turns out, subtle psychological manipulation can actually be quite the persuasive red herring.

It's a lucky thing that Seo-jin spent most of the last episode being nice, because he really does need a friend right now. Seo-jin's house has always seemed rather comically empty- a pretty blatant acknowledgment of the man's own anti-social behavior. And even when offered a helping hand here Seo-jin manages to come off as pretty rude. Finally, a cohesive character arc- Seo-jin is going to have to at the very least cooperate with Robin and Ha-na in order to get through this mess.

Other characters aren't quite so well-defined, but the improvement is palpable. Seong-yeon actually has a reason to be in he drama- although how he could be aware of this much information without knowing who Robin really is makes for another mystery in itself. Truth be told there's still plenty of inconsistencies. We get to see the full context of the kidnapping, and while some questions are resolved, it's still unclear to me how nobody could have seen those two leave the building.

But past inconsistencies are quite forgivable in the context of actual dramatic tension. Take the cliffhanger. Even if the writing is still a little sloppy regarding logistics, in this case the inconsistencies are being used to force a confrontation rather than make the characters avoid one. All the showdowns we see here are pretty good, an they cover a fairly wide gamut. Detective investigations, nemesis staredowns and even just teatime have actual interpersonal stakes involved.

The only real complaint I still have is that we're still not seeing too much of the actual circus. But then, circus stunts are less directly relevant in the face of an actual plot that can be analyzed. That's the beauty of "Hyde, Jekyll and I" right now. It's using characters to drive the spectacle rather than the other way around. This isn't a perfect turnabout, but for once I'm actually interested in what's going to happen next. And consider how frustrating the drama has been to date, this is no small accomplishment.

"[HanCinema's Drama Review] "Hyde, Jekyll and I" Episode 8"
by HanCinema is licensed under a Creative Commons Attribution-Share Alike 3.0 Unported License.