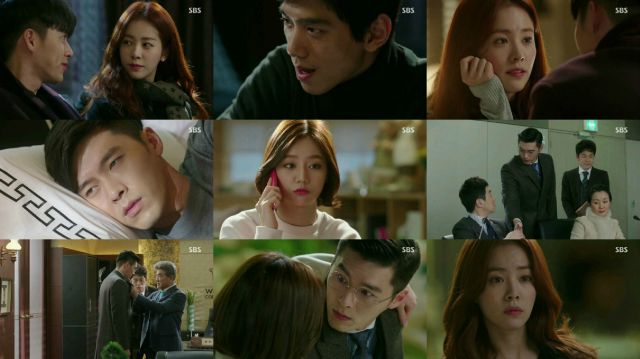 Now that Tae-joo has been outed as the true villain, "Hyde, Jekyll and I" has become substantially more cohesive. In the first place I've finally figured out what Seung-yeon and all the other corporate blokes are supposed to represent- not actual villains, but mild patsies. Their concerns about proper company management are in fact mostly reasonable. The Seo-jin / Robin conflict, and the inability of daddy Myeong-han to appropriately resolve it, are what's created the power struggle.

Poor Seo-jin himself is apparently incapable of handling the stress anymore, and it's hard to blame him. The exposition of his vulnerabilities has done wonders for the drama's storytelling. Seo-jin might not be any less of a jerk, but it's clear how the repressive environment he lives in many ways fosters his mental illness. Robin is not just a hero who rescues people- he's also friendly, outgoing and helpful. I get the distinct sense that Seo-jin believes he can't actually do any of these things.

The overall conflict also gives Hyun Bin much better opportunities for subtle acting. Robin in quiet serious mode isn't just Seo-jin with a different coloring. For the first time we see Robin acting in such a way that doesn't further any kind of dangerous hero fantasy. From a psychological perspective it's all very Jungian- we all have true selves that we hide from the outer world with a certain facade, and from this context it's easy to see how Seo-jin and Robin are really the same person.

The romance is subdued, although this much is to Robin's credit. Rather than gloat about having made a serious victory, furthering the rivalry we've seen demonstrated with Seon-jin, Robin is cautious even with Ha-na. Yes, his pronouncement is rather adorable but notice the greater context of the scene. There's no wacky circus action here- they're just spending time together sharing their more intimate thoughts. From this point, it's easy to see how Ha-na could become a helpful co-conspirator in this action.

Speaking of the circus...there's still very little actual circus stuff. Fortunately the other aspects of the drama have become engaging enough to easily pick up the slack in that department. The struggle with Tae-joo takes on particularly interesting dimensions because now we, the viewer, know exactly what's going on even if all the characters don't. That's the appropriate way to build up genuine dramatic tension. The improvement this drama has shown lately is drastic, and I can only hope it continues along the same lines.

"[HanCinema's Drama Review] "Hyde, Jekyll and I" Episode 9"
by HanCinema is licensed under a Creative Commons Attribution-Share Alike 3.0 Unported License.