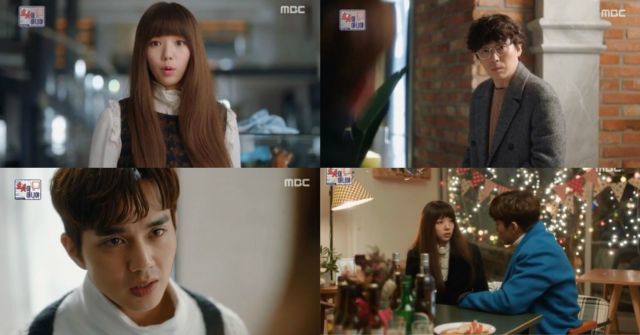 I had forgotten, until Min-gyoo decided to research the subject, that AZ3 "learns" how to mimic human behavior by watching movies, as well as the nerdy scientist team. This is an obviously ridiculous design feature to the point that it breaks the willing suspension of disbelief. And I'm not referring to myself. Min-gyoo is the one who starts to feel increasing doubt about the entire AZ3 project. That Baek-gyoon's team has decided to let their guard down now all of all times does not help matters.

It's at times like this I can't help but be reminded that AZ3 is not a terribly practical piece of technology. Baek-gyoon balks at the idea of her being used for companionship purposes, and he also expresses objections here to her being used as a robot maid. So what, then, is the purpose of AZ3 even supposed to be? AZ3 is a project that could only possibly be useful to someone in Min-gyoo's extremely specific situation, but Baek-gyoon needs investors, not a single high profile sale.

Beyond the practical concerns, there's not very many ethical reasons to root for Baek-gyoon's team to succeed either, since they've been representing AZ3's abilities to Min-gyoo fraudulently. "I'm Not a Robot" accidentally calls attention to this by giving Baek-gyoo and his bespectacled co-worker Pie (played by Park Se-wan) a romantic subplot. That storyline could potentially end with Baek-gyoo and Pie becoming happy, whereas the fraud storyline increasingly just seems likely to make Min-gyoo miserable.

As for Min-gyoo's explicit stated goal of kissing and marrying Ri-el, "I'm Not a Robot" has finally hit the point where Ri-el shows up in imaginary scenes more than she does in person, rendering her character increasingly abstract. The imaginary scenes aren't even that funny. The second one features AZ3 doing something a robot should explicitly not be physically capable of doing. A few real scenes later a depressed Min-gyoo even calls attention to that fact.

"I'm Not a Robot" is running afoul of its own inherently absurd nature. If the drama were embracing the more surreal aspects of its fairy tale premise, this would not be a problem. But the production team is making the unfortunate decision to instead focus on standard romantic drama, which only calls attention to how fundamentally unsolvable the drama's main conflicts really are. I just hope we start seeing more of the actual villains soon, if only to give the protagonists better goals to strive for.

"[HanCinema's Drama Review] "I'm Not a Robot" Episodes 13-14"
by HanCinema is licensed under a Creative Commons Attribution-Share Alike 3.0 Unported License.