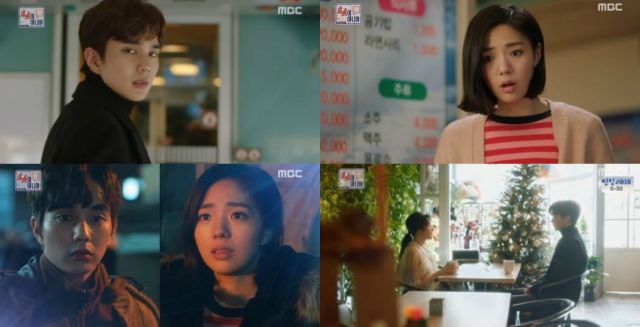 So having appeared briefly in a few inconsequential scenes, Ri-el simply drops away from Min-gyoo's life disinterestedly, much like how she re-entered it. While I appreciate "I'm Not a Robot" simply abandoning a subplot it obviously had no interest in developing in the first place, the drama then makes the bad decision to focus on the two aspects of the story I liked even less than Ri-el. There's the attempt by malicious forces to steal AZ3, and everyone continuing to deceive Min-gyoo.

Ji-ah spends a ridiculous amount of energy refusing to talk to Min-gyoo. I was tired of her schtick after maybe five minutes, so it was with a groan that I realized she was going to continue trying to push Min-gyoo away for both episodes. Logically Ji-ah's actions make sense, considering she doesn't want Min-gyoo to find out the lie. But emotionally, most of episode twenty was simply about how much she missed him. Ji-ah could be forgiven for wanting to be with Min-gyoo a little longer even considering the obvious danger.

As for the malicious forces going after Baek-gyoon's computer, I could honestly care less about Baek-gyoon's research at this point. The entire situation between Ji-ah and Min-gyoo is entirely his fault, and if anyone should be punished for lying, it's him. Bear in mind the entire hacking sequence is pointless anyway. So Baek-gyoon has enemies. So what. I was under the impression he already knew about that.

Yoo-cheol being the chief villain is sort of new, but he's quite bad in this role. Yoo-cheol has valid financial reasons for wanting to know more about the AZ3 project. For that matter, Yoo-cheol could have personal reasons, considering the extent to which Min-gyoo was deceived. We already know that Yoo-cheol is evil, mostly because of anger issues. It just bugs me how his motivation could easily be rewritten to be even more sympathetic without changing anything of relevance in the story.

Consider how, while Yoo-cheol is trying to divine the secrets of the AZ3 project, Min-gyoo just blows off work entirely so he can stalk Ji-ah. Which is another reason why Ji-ah trying to get rid of him is so problematic. Ji-ah is completely right in that Min-gyoo is being a completely creepy stalker, and he even admits that this true. The only factor that could mitigate that situation would be if Ji-ah was encouraging him, and that's not what's happening

"[HanCinema's Drama Review] "I'm Not a Robot" Episodes 21-22"
by HanCinema is licensed under a Creative Commons Attribution-Share Alike 3.0 Unported License.