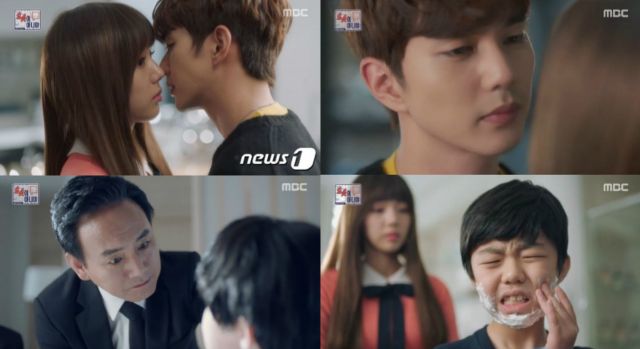 Ri-el (played by Hwang Seung-eon) is Min-gyoo's childhood friend and presumed alternate love interest. She has very little screentime. Her only new scene is suspiciously cut short right before she's about to say something important. So Ri-el's main contribution to the story so far is that she provokes one of Min-gyoo's attacks, which leads him into flashback mode detailing his generally horrible backstory that explains, among other things, where Min-gyoo's psychomatic skin condition comes from.

The literal events of the flashback are implausible, to say the least. But then legal issues of inheritance and guardianship as relates to child survivors are very much besides the point here. After all, Min-gyoo is the protagonist of a modern fairy tale, playing the role of the ill-fated prince. It's just that instead of witches, magic spells, and curses, the culprits are men in suits, legal mumbo jumbo, and psychological conditions. These parallel each other quite nicely.

Unfortunately the flashback is so compelling that the remainder of these episodes is a bit of a let down by comparison. Now that we know people are out to get Min-gyoo, and that Min-gyoo has spent most of his life trying to force enough distance between himself and his persecutors to prevent from being overtaken, I really want to see how he does it. So far we've only ever seen Min-gyoo be a jerk to people who don't actually deserve it. High-ranked company man Do-won (played by Son Byung-ho) would be another story entirely.

Another character of considerably more interest now is Yoo-cheol (played by Kang Ki-young), a man who used to be Min-gyoo's friend. Yoo-cheol appears to be genuinely concerned for Min-gyoo's welfare. But as Do-won's son, Yoo-cheol was unwittingly caught up in the fairy tale nightmare and now...we still don't know that much about him because "I'm Not a Robot" is still not fleshing out central characters.

Again, most of what we see here is just Min-gyoo talking to Ji-ah under the very silly assumption that he can tell his robot anything. Is Min-gyoo aware of the fact that Baek-gyoon's team is privy to all their conversations? All the same, it's funny. Even the crab jokes were funny, even if inevitably very silly. But I'm still impatient for the story to really get moving. Even if it obviously fits Min-gyoo's ethos to talk about problems rather than directly addressing them, there's no excuse for everyone else to be so passive.

"[HanCinema's Drama Review] "I'm Not a Robot" Episodes 7-8"
by HanCinema is licensed under a Creative Commons Attribution-Share Alike 3.0 Unported License.