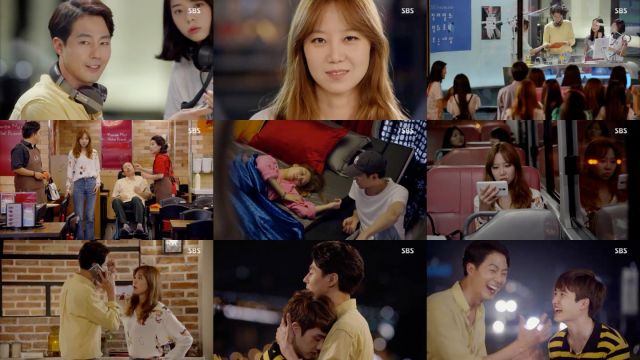 The cliffhanger of the last episode was mildly creepy. The opening of this episode continues in that direction, quickly becoming really creepy. I genuinely have no idea how to view Jae-yeol's actions here. Are these gestures supposed to be romantic? Then why do they feel so vaguely threatening? I might be able to accept this kind of playfulness from long separated lovers but these two quite literally met each other only a few episodes ago. I'm surprised Hae-soo puts up with it, considering how she never puts up with anything else.

But no, it's made very clear that on some level she actually likes the attention, as flashbacks constantly interrupt her day at work. I'd like it, by the way, if we could spend more time on Hae-soo's actual job. Mental health care is a genuinely interesting topic that most people (including myself) really don't know that much about. But we get maybe a few factoids per episode in a medical context, with most of the on-screen diagnoses coming from the characters' personal lives.

Notwithstanding the overall creepy tone of the romance, very little of the rest of the cast is particularly endearing either come to think of it. There's only so much patience I can have for these little psychological quirks before they become annoying, and I start to realize that even without the quirks none of these people are all that sympathetic or interesting. This drama only even barely has an actual plot.

Television should, in some form at least, manage a bit of escapism, and yet the more I think about it the more I realize that the characters in "It's Okay, That's Love" remind me of little facts in real life that I'd just as soon forget. Like how it really makes absolutely no difference whether or not a person is rude or mean- rude mean people tend to get what they want in the world, because most people aren't willing to stand up to them.

Or, in this case, because the script is unwilling to cast any of its characters in a negative enough light that they're actually forced to grow and learn as people. "It's Okay, That's Love" is increasingly leaving a bad taste in my memory. Even the sweeter moments, like the visual we get at the end of the episode, can't really escape the drama's core problem of basically unsympathetic characters not really doing anything.