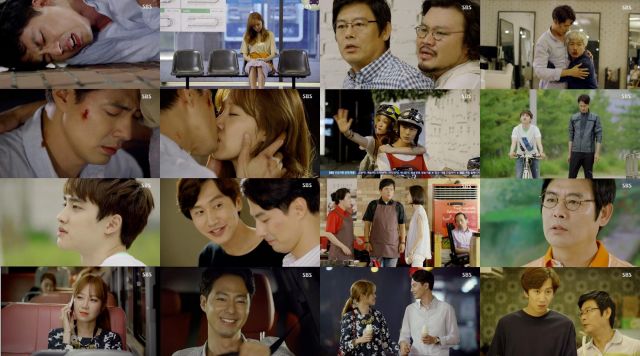 In the opening of this episode, in the aftermath of a mental patient's escaping due entirely to the fault of Dong-min, Hae-soo completely fails to notice that a man is being beaten by a baseball bat and dragged away right in front of her. Jae-yeol, for his part, rather than get help, manages to escalate the fight in such a way that it completely destroys a nearby unrelated private space. The situation is a terrifying one- not from the perspective of the drama, but rather from the onlookers.

It really needs to be emphasized- all of the central characters in this drama are destructive, incompetent, and completely oblivious to anything that doesn't directly affect them. What's worse, they don't see any problem with this. Jae-yeol offers to cover up the damage monetarily. He completely fails to grasp the fact that when a person sees all their stuff destroyed by a fight between a couple of insane people, there are factors at play here beyond oh, I hope it doesn't cost too much money.

This episode makes it all too frustratingly clear that no one in this drama is ever going to face meaningful consequences for their actions. Somehow the police don't get involved. I guess Jae-yeol's bribe really was that convincing- good thing he's rich! A better question might be why the hospital doesn't censure Dong-min in any way. At the very least his later actions this episode clearly indicate that absolutely nothing was learned from the previous incident. That's some questionable psychiatric work there.

What's worse, there's not even much a reprieve from any of this, since all the other character relationships are just as bad. The situation between Soo-gwang and So-nyeo continues to escalate in sheer creepiness. The housemates in general continue to be rude and disrespectful to one another, and not in a friendly way. They're constantly trying to stick it to each other for no reason other than exhibionist showmanship. I'd like to iterate here- I can't imagine why anybody would willingly want to live in this household. Everything we've seen is just so horribly unpleasant.

Even relatively innocuous storylines, like the traumatic issues involved for the man who cut off his arm, tend to suffer just by having such close proximity to such insufferable obnoxious characters. I'm increasingly seeing the psychological issues here as a smokescreen. They're intended to garner sympathy, but that only works internally. It's the external direction that these characters need to see a shrink, and that's simply not happening.