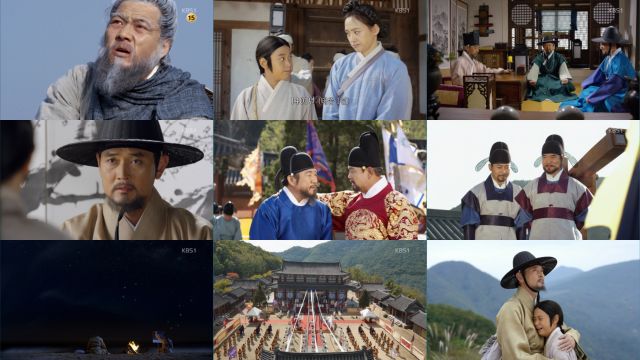 Yeong-sil (played by Song Il-gook) first appears as a decrepit old man moving across a vast field for one purpose- to view an eclipse. While the action soon moves into flashback mode eclipses remain an important plot point. While technically irrelevant to daily life, knowing when and how an eclipse will happen is a sure sign of scientific advancement. Under New Joseon, currently led by King Taejong (played by Kim Young-chul), science is a pretty big deal.

I'm going to be using the word "science" a lot for "Jang Yeong-sil - Drama", and for good reason. While "Jang Yeong-sil - Drama" is ostensibly a historical drama about Korea's most famed scientist, in practice the action is a loving tribute to science and the scientific method in a way that would make Carl Sagan proud. Even as a young boy of dubious lineage Yeong-sil shows strong aptitude toward inductive reasoning, and with childish glee seeks to share his learning with the rest of the world.

The world, though, is not so interested. The background of "Jang Yeong-sil - Drama" depicts a Korea where knowledge is considered a privilege used by those of high rank to bully those lower than them- it's not a treasure to be shared. King Taejong, to his credit, readily seems to appreciate that this is a bad thing, and yet as we see, his initial reaction to apparently being snookered goes a tad too far. King Taejong is a product of a darker time period (watch "Six Flying Dragons" for reference on that), and it shows.

Yet at the same time King Taejong is still a loving father. This is an important parallel- Yeong-sil's one father Seong-hwi (played by Kim Myung-soo-I) bonds with his son and ultimately decides to flout convention for the sake of Yeong-sil because, well, because Seong-hwi loves science too. In this context science isn't just this very important concept we need for everyday life- it's a way of expressing love.

The production team has really outdone themselves with "Jang Yeong-sil - Drama". After the fairly dour pseudo-documentarian style of "Jing Bi-rok" I really wasn't expecting KBS1's next historical project to be so...well, so fun. At minimum it's easy to see why Song Il-gook was attracted to "Jang Yeong-sil - Drama". This is the kind of drama you can watch with the kids at home to show them how wow, isn't science crazy? Just think, with a little lateral thinking you too can look straight at the sun without being blinded.