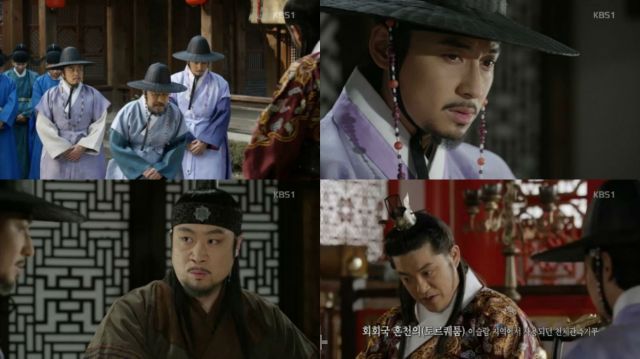 For all this Yeong-sil is still pretty important to the story, since apparently the purpose of all those action scenes last scene was to finally bring Yeong-sil to a place where he could see...a legendary water clock that the Chinese apparently can't fix themselves. For the record, while I think the historical Yeong-sil was probably pretty smart, I doubt he was so smart that the Chinese couldn't find their own scientist to fix the clock.

What I liked best about the legendary water clock, though, is how it gives Yeong-sil, and by extension the viewing audience, a sense of tunnel vision. Yeong-il pretty much completely forgets about all the attempts on his life once he gets access to the clock. Even when given the opportunity to confront the man responsible for much of the danger lately, Yeong-sil lets out his rage but eventually realizes that for the sake of science, he does need an assistant.

With the Chinese story arc mostly resolved, we also get a glimpse a the usual chaotic political situation back in Korea. In a bizarrely brief scence So-hyeon manages to appear just long enough to be the victim of a glancing and mostly pointless-looking attack. This scene generally just serves as a reminder that Korea has not turned functional since Yeong-sil left, and once Yeong-sil returns, there will probably be another political conspiracy that will somehow be caused and/or solved by Yeong-sil's love for science.

To be entirely honest, the story in "Jang Yeong-sil - Drama" really isn't all that difficult to follow compared to something like "Six Flying Dragons". There's fewer clearly defined characters and fewer factions, and what we do get in that department usually only stick around for a few episodes. Once all the turmoil regarding clandestine Chinese assassination missions is resolved, we probably aren't coming back to this area. On the flip side, that does make any possible resolution a tad unsatisfying- except when it comes to science of course.