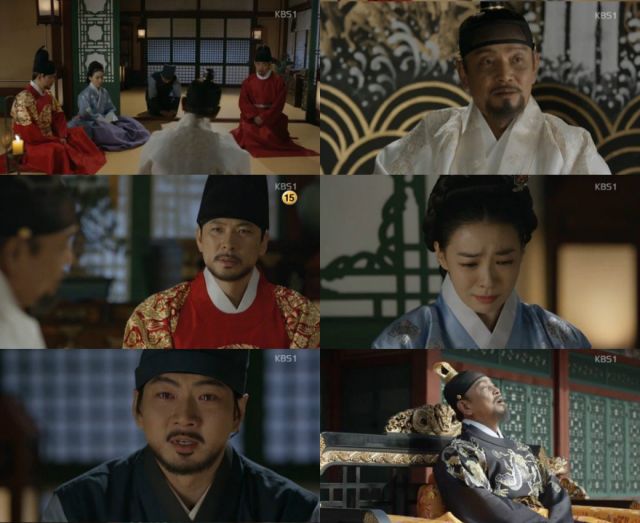 After a large scale and mostly unnecessary swordfight the Chinese portion of "Jang Yeong-sil - Drama" concludes, as usual leaving me asking the wrong kind of questions. Is anybody else noticing the irony here? Song Il-gook is in an action-heavy drama, as a guy who logically does not know how to fight and spends most his time in the action sequences chronically dodging hits? When even the token woman picks up a sword and starts hacking away I have to wonder whether "Jang Yeong-sil - Drama" would make more sense if it just ignored logic entirely and made Yeong-sil a kung fu scientist. For all we know, he might have been one.

...All right, hopefully, that's the last time I'm going to have to criticize that specific aspect of the production. Hopefully. When Yeong-sil gets back to Korea, he goes through the usual ringer of being bullied for having a low birth status, and as far as I can tell, that's where the conflict is now. It's pretty obvious to King Sejong that these policies are really stupid and pointless. The question is, how to politically resolve this problem?

Of course, Yeong-sil's relation to this potentially interesting conflict is still a tad tangential, like he's a side character in his own drama. Director Kim Yeong-jo does make a point of having Yeong-sil be in the room most of the time. But then I always end up wondering why anyone thought it was important to bring the scientist along to scenes which are otherwise very personal and involve people Yeong-sil doesn't really know all that well.

Like King Taejong's ultimate farewell. His historical position is an interesting one- as has been noted it has frequently confusingly seemed as if King Taejong and King Sejong are both King at the same time. And this really stifles King Sejong's ability to reform, when everybody knows Daddy has to approve first. Kim Young-chul has consistently put in pretty great work as the conflicted elder monarch who knows he has to let go of his iron grip on the government but just can't seem to figure out how.

Personally, though, I'm much more interested in the scientific aspect of "Jang Yeong-sil - Drama". I was immensely relieved when by the end we've finally gotten to where we should have been a long time ago- Yeong-sil and his friends making a new workshop far away from those political fuddy-duddies. I can even tolerate cheesy romance just as long as there's some fun science to explore nearby.