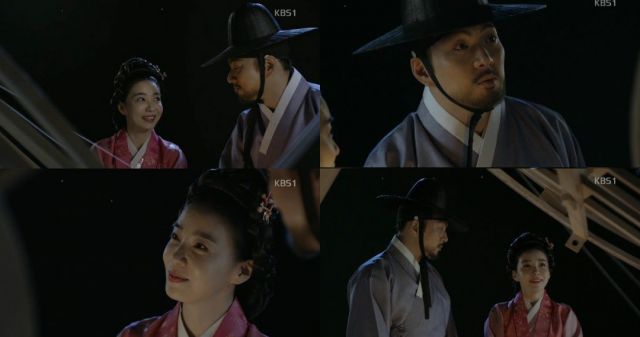 Yeong-sil has learned a valuable lesson from the constant apparently unnecessary attempts on his life. While it's great that Yeong-sil has managed to gain an official scientific position within the Joseon, nobody likes him. The other scientists don't really have a good reason for doing so, but that's besides the point. Pecking orders aren't based on logic. Up until now science has been a means of social advancement in Korea, and King Sejong can't change that overnight.

I like how Yeong-sil is a constant picture of humility rather than a man of arrogance. It's appropriate because while we like to think of trailblazers as being bombastic men of action, in reality getting along with social orders tends to be really important for high-level work. Galileo, for example, was censured by the Catholic Church more because he was a jerk than because anything he did was all that objectionable. Kepler had a more radical (and accurate) idea of heliocentrism, and he was a Lutheran, but nobody sent the Inquisition after him.

This is relevant, because note how in this episode Yeong-sil is cautious and conservative until he is absolutely certain that his theory of the eclipse is correct, and provable enough to not risk discrediting King Sejong's entire program of opening up the qualification process. It's a very fitting counterpoint to the more general scientific instruction of the episode, because we see that it's only through obsessive work and calculations that accurate information regarding celestial movements can be predicted.

It's a very good overall storytelling thrust, because note how even Yeong-sil's romance with Princess So-hyeon progresses on the same stilted lines. This isn't Yeong-sil being a shy nerd- it's Yeong-sil being sensible because he knows full well that messing around with royalty is a good way to make unnecessary enemies. Granted, the shy nerd bit is also an aspect to that but what's a guy supposed to do? Yeong-sil's first love is science, and it's only thanks to that shared passion that he's able to spend time with So-hyeon at all.

"Jang Yeong-sil - Drama" is finally moving more toward the actual strengths of the story, and farther away from the palace intrigues. It's not even necessarily the science that makes the drama interesting right now so much as it is the obvious parallel to any kind of work that involves social elements. Perhaps those of you working at the office haven't had to fear quite the serious reprisals that Yeong-sil has to worry about, yet even so. Sometimes it pays to be humble in victory.