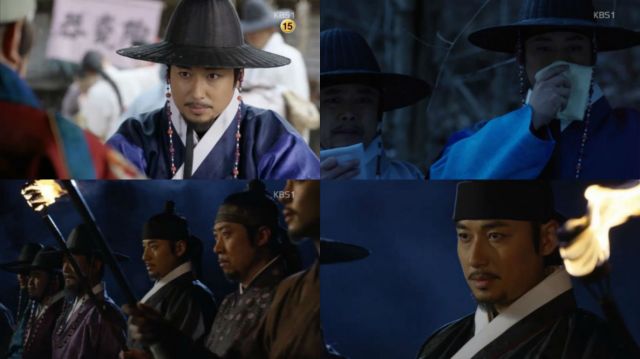 A major scene in the early part of this episode does a good job explaining the contradictions of "Jang Yeong-sil - Drama" as a whole. We start out with Yeong-sil working, idly wondering about the political situation but mostly just puzzled as to why his current astronomical calculations aren't working. Then a bunch of aristocratic bullies show up and force a physical confrontation. Wrestling moves are involved. At long last Yeong-sil inadvertently comes up with a breakthrough and rushes back to inform his team.

You may have noticed that the bookends and the center of that synopsis are a bit at odds with each other. Really, the center is at odds with itself. I could see Yeong-sil being denied funding through some bureaucratic procedure, but an actual physical fight seems to be taking things a little too far. This is especially true when we consider that Yeong-sil is initially confused as to why these people are mad at him, and eventually even gives up trying to listen to them because science is way more interesting than politics.

Moments like this baffle me. Why does "Jang Yeong-sil - Drama" insist on spending so much time on hierarchical rules when the main character himself doesn't care about these rules, and the antagonists have to go out of their way to pick a fight with him? Other interludes, such as King Sejong walking about the street and noticing tragedy, seem especially out of place considering that Yeong-sil's key interest is astronomy, not social justice.

Even potentially good subplots are very frustratingly and unnecessarily cut short. Yeong-sil and So-hyeon have barely even had any screen time together at all, yet somehow even those tepid interactions have already managed to inflame a political crisis. Tears are involved. It all seems so very over the top considering how underdeveloped this storyline is, and we're barely even through with that before it's time to worry about fires again. Is Yeong-sil going to have petition for a personal guard at some point? Is that really going to be necessary?

The anatagonists in "Yang Jeong-sil - Drama" consistently irk me, because they're tremendously petty and rarely have any motivation more complicated than just not wanting other people to have nice things. I get that "Jang Yeong-sil - Drama" is trying to present a time period where toxic Goryeo ideas yet remain even though Joseon is now on its fourth king. Even so, I imagine these fights were over some sort of tangible benefit, not sheer spite alone.