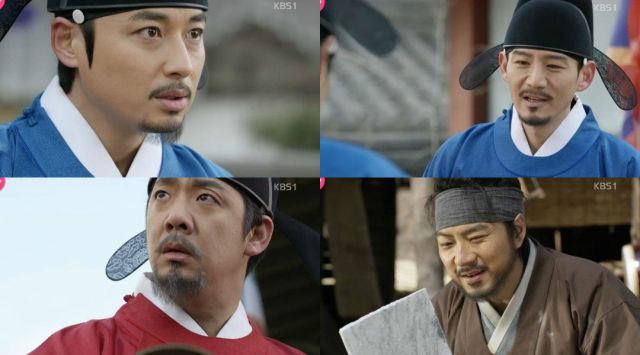 This episode opens up with Yeong-sil and his science buddies admiring the stars and pondering over the mysteries of the universe as Jang Yeong-sil's scientific bagpipe music plays in the background. It's a capstone to a whirlwind of successful research, and I really hate these scenes because they mostly just remind me of the story that "Jang Yeong-sil - Drama" could be telling, except that now it's time for the requisite unnecessary violence on the part of science-hating extremists.

I know that antagonists in "Jang Yeong-sil - Drama" do not really hate science, but most of the time this is a more sensible motivation than their needlessly complicated political posturing. Is astronomy really all that important? It's certainly a relevant enough scientific discipline, but "Jang Yeong-sil - Drama" constantly makes it seem as if astronomy is so important that political leaders are willing to field small private armies just to make sure it stays in the right hands.

That much is just plain silly, with the consequence being that it's difficult to take much of anything in "Jang Yeong-sil - Drama" all that seriously- Yeong-sil's improbable escapes are only one of many major structural problems with the story. I have to wonder how King Sejong can be so horribly ignorant about everything that's happened until it's already too late. Shouldn't he at least be a little suspicious at this point?

I understand what "Jang Yeong-sil - Drama" is going for here. We're supposed to be sad that Yeong-sil has to go through such troubles all for the sake of science. Yet as far as the people who do die are concerned, their importance is obscured by the fact that we don't really have any idea who they are. I wouldn't even have been able to name them if it weren't for the historical subtitles. Mind, I doubt any of these people were real- even if such events really happened, who would record them?

Huge destructive episodes like this make King Sejong's reign of Joseon look horribly dysfunctional. It's a wonder Yeong-sil was able to find time to invent anything considering how often his workshops end up getting destroyed and later relocated. For that matter, why doesn't he just run off to China, where people appreciated his talent and made some effort to avoid having him killed? Once more, I'm left hoping "Jang Yeong-sil - Drama" will just give up this story thread and try to be about the actual science.