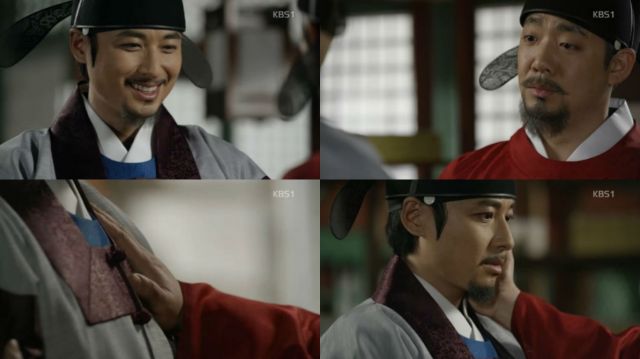 Now that Yeong-sil is apparently dead, all anyone can seem to talk about is what a great smart guy he was. Which is awkward, considering that the principal men involved in the assassination attempt on the poor scientist still have their government positions, and just can't seem to escape the fact that even in death Yeong-sil is way smarter than they are. "Jang Yeong-sil - Drama" has the kind of villains who seem pathetic even when they win, because their competence begins and ends with cloak and dagger conspiracies.

It doesn't help that when the action finally gets back to the very much alive Yeong-sil enjoying his new life as the neighborhood guy who loves science, well, why should he want to have anything to do with the palace intrigues at all? Yeong-sil loves making high quality scientific instruments, and at the same time he also loves the mutual exchange of information to make even better scientific instruments. Yeong-sil's also such a personable guy he even takes time to give science tips to random kids in the street.

This is all the usual flawed duality behind "Jang Yeong-sil - Drama". Anytime the drama is focusing on the science, and the wonder which surrounds science, it's easy to get into Yeong-sil's worldview and understand why it is that throughout history nerdy people have always been able to get so completely engrossed in the discipline. The villains just can't compare to that because they continue to see science as a societal obligation rather than a labor of love.

I'm getting the impression somewhat that this rather simplistic flew of scientific heroism may be an attempt to make Yeong-sil conform to certain popularized perceptions of smart people. Which is to say, since Yeong-sil's superiority is so self-evident, the only way to explain his inability to conquer the world is by the actions of elaborate conspiracies on the part of inferior intellects. While I can see what "Jang Yeong-sil - Drama" is trying to do, the general inaccuracy of such stories only accentuates the drama's improbabilities.

Once again the main saving grace in "Jang Yeong-sil - Drama" is when the characters act happy. Part of this is just a genre issue- Joseon-era dramas in general tend to have a lot of dark material, so it's quite distinctive whenever "Jang Yeong-sil - Drama" loses itself in unabashed joy. Hopefully, as the villains lose confidence and Yeong-sil's fans increase in number, we'll get more smooth sailing to Yeong-sil actually inventing stuff.