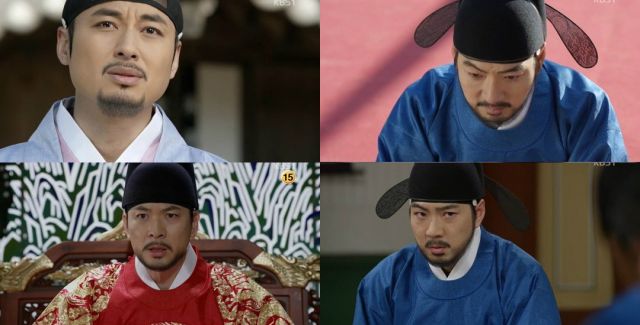 Hee-ji belatedly feels some guilt here about jealously trying to use violence to drive Yeong-sil out of the field of science. It's lucky Hee-ji didn't go all the way, even if he was technically operating at the behest of a conspiracy. I continue to find the scientific conspiracies the most baffling part of "Jang Yeong-sil - Drama". They don't even have hired goons or anything, the bad guys are perfectly fine with beating people up in broad daylight while still wearing their fancy clothes. Eggheads have never been so scary.

Fortunately the parts with Yeong-sil are still fairly strong. I like Yeong-sil as a character, and his sense of utter determination. More specifically it's his motivation that really shines. Yeong-sil does not do science for the sake of abstract concepts- he's a scientist because he wants to help enrich the lives of the people. Yeong-sil ultimately decides to fight for his friends, because science is what can bind friendships of any nationality or creed.

As corny as this message is I really do wish "Jang Yeong-sil - Drama" would be consistent with it, because passionate performances can sell corniness. They can even sell sadness to a certain extent. The main glaring flaw in "Jang Yeong-sil - Drama" as a whole is that there's obviously a lot of passion involved in the production of this drama, it's just very well utilized only some of the time.

Take the music. I really love the string music that eventually goes into the bagpipes. At this point I can even feel when we're getting to the kernel of the argument. Yeong-sil starts out with the background and gradually works his way to the part of the explanation that inspires dedication. As character motifs go the bagpipes are quite excellent. They connote formality while also feeling a bit distant and far-off, as are the dreams Yeong-sil has of the future.

This episode is also home to a somewhat dubious honor- this quite possibly has to be the first time I've ever been glad to see a story randomly interrupted by a dance party. It just goes so well with the music! "Jang Yeong-sil - Drama" is always able to do such great work with the emotion of joy. Whether it's science or music or friends, everyone loves something and the happiest moment for most of us it just being able to show off that level of ardent devotion. It's moments like that which make me want to give "Jang Yeong-sil - Drama" another chance, because when it's good, it's really good.