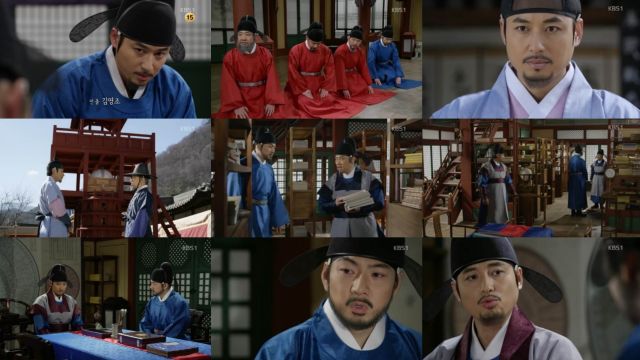 While this episode certainly has its share of ominous brooding when it comes to authority figures of dubious reputation, fortunately, for the most part no one actually tries to cash in on the threats. Yeong-sil presents a simple, easily understood alternate scientific theory, and from there it's just a matter of put up or shut up. Good clock design can only get a man so far when the amount of possible elaboration is such that a near infinite variety of models is possible.

As usual "Jang Yeong-sil - Drama" is excellent when it comes to technical design. I'd never really put much thought into just how complicated clocks really are- but that's mostly because all the clocks we have today are really small, and we'd need a microscope to really see just what all those parts are doing. Yeong-sil's more epic design offers all sorts of opportunities for further explanation and experimentation. While Yeong-sil's clock isn't perfect, it's clear that he's working on that part.

Aside from the clock we also get a glimpse into the more obviously useful military applications of science. That much is a very good reason to make sure that any nation's scientists are being selected by merit rather than arbitrary class modifiers. It's relieving that we now have characters aside from King Sejong who appreciate that, since that moves the focus of "Jang Yeong-sil - Drama" away from politics and more into genuine problems of practicality.

The only real misstep here is the philosophical material. Given the historical context "Jang Yeong-sil - Drama" has shown us so far, I'd think Yeong-sil would be more effective as being symbolic of King Sejong's reforms than he would be an incredibly brilliant man who other characters are jealous of. Just look at Yeong-sil's construction process. He's employing a lot of laborers, and odds are they understand the clock as well as he does, because Yeong-sil had to explain why they were building what.

Given all the problems "Jang Yeong-sil - Drama" has had so far with factors like violent upheavels and fires borne of petty spite, though, that much is really more a philosophical quibble. I rather wish the production team had been focusing more on these kinds of politics throughout "Jang Yeong-sil - Drama"- where the main obstacles are overcoming skepticism and forcing characters to reevaluate long held views regarding the proper development and expression of knowledge. I can only hope the tone continues in this way through to the end of the drama.