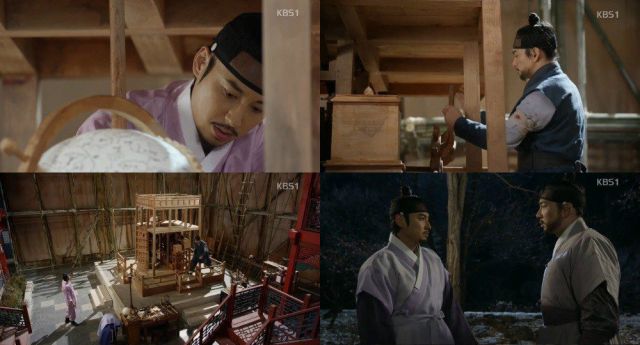 Hee-ji suffers from his usual character conflict here. Yeong-sil is such a genius, Hee-ji feels eternally incompetent, so Hee-ji must struggle between his love of science and his desire to burn things. Again with the fire! Forget about clocks, King Sejong really needs to do something about public services. One of these days someone is going to try to burn something important, and at that point, he's going to wish there was a fire brigade to deal with the problem.

As usual Yeong-sil is a frustratingly passive character in his own drama, because Hee-ji is the only person who ever makes proactive decision. It feels like we're at self-parody when everyone insists about talking about Yeong-sil all the time in the third person any time he's not on-screen. I'd really much rather see Yeong-sil do great things than have characters remind me of great things Yeong-sil has done in the past. I'm still unconvinced, by the way, that the elaborate trap really required a very strong grasp of science.

So what's good here? The musical design as usual. While the segue into bagpipes remains my favorite tune, most of the score here is pretty good. It nails a very subtle yet essential emotion- the idea that the situation is improving. The gradual seeping of science into everyday life bodes well for the common people, who are now better able to manage change efficiently. And the villains hate this because I guess they just hate change on general principle.

The basic theme behind "Jang Yeong-sil - Drama" is a good one. In its best moments, "Jang Yeong-sil - Drama" encourages the viewer to ponder over how even the most trivial, irrelevant sciences are a major influence on our everyday lives. Yeong-sil is a genius less because he's super smart and more because the man can explain and communicate science on a basic level. What good is genius, after all, if there's no one to share in it?

But then the political bits show up and drag the drama down, because Yeong-sil is not a politician and the main villains are more interested in starting fires then discussing philosophical ideas anyway. What makes this especially irritating is that the villains have no apparent material gain from acting this way. They're spiteful for the sake of spiteful. While Hee-ji at least has jealousy going for him, no one else can even rise up to that level of shallow motivation.