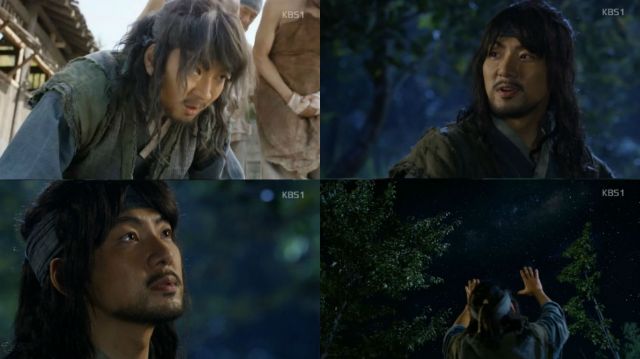 As much as Yeong-sil loves science one fact is unassailable- his cultural background is unimpressive. So while other better pedigreed kids in the family study all day, Yeong-sil has to do hard labor and wait until nighttime to do science, which is fortunate because this episode Yeong-sil decides to learn everything he can about the moon. In this case "Jang Yeong-sil - Drama" takes an unusual approach to the scientific method by using it to explain wrong science- specifically, geocentrism.

This makes for interesting material because while it's all fun and games to talk science up as awesome and amazing, the fact remains that for most of human history scientists have gotten lots of basic aspects of the universe wrong. This isn't because they're incompetent, but rather a symptom of how there's only so much that can be done with limited tools. Most of the time it's easier to try and work within the confines of an old theory rather than try to build up a new one from scratch.

It's from this background that "Jang Yeon-sil - Drama" ends up moving on to the adult portion of the story (featuring Song Il-gook) much more quickly than I was expecting. The reason for this is that, as a kid, Yeon-sil is stuck in a rut. Absent of major political reforms there's not very much Yeon-sil can do for the sake of science except continue making calculations at his hideout in his free time.

By the way, kids, that's the kind of cool stuff you can do if you get into science- build super cool mini-fortresses with moving parts and stargazing. I have to say, by the way, that the set design "Jang Yeon-sil" is quite excellent. Whoever's building this stuff knows exactly what they're doing. The editing's pretty sharp too- I love the diagrams. And as for the music- was it just by imagination, or were there bagpipes in there at one point? Very solid stuff.