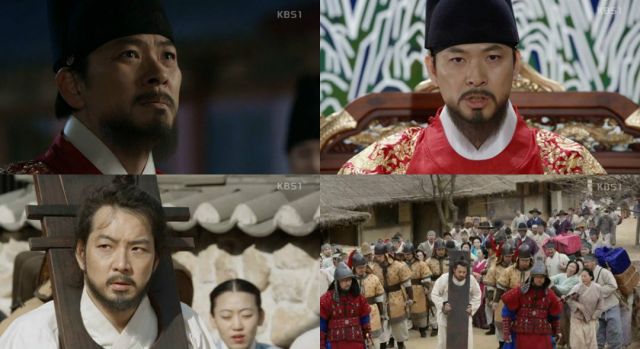 Throughout all his trials and tribulations, Yeong-sil has remained a surprisingly good sport. There's good reason for this. As bad as jail might be, Yeong-sil at least has his sketchbook, which gives him a chance to think over matters of science. That's always good for a nice matter of calm, even if this time, Yeong-sil's friends can't help him. There's just disgrace and corporal punishment, while Yeong-sil sulks and starts to hate the world.

Once more there are multiple timeskips. In this, the final episode of all places. We even manage to go over multiple kings while mostly ignoring King Sejong's death except for a brief reminder about how great the Korean alphabet is. All this detail leads me to believe that, whatever create liberties were taken with the rest of Yeong-sil's life, he really did face a sort of political inquisition and it did in fact require a complete change of the guard for Yeong-sil to regain his rightful reputation.

I think about that and end up feeling more disappointed about the overall direction of "Jang Yeong-sil - Drama". Whatever the real-life motivatin was for Yeong-sil's persecutors, I very much doubt it was all that personal. Short-sighted, overly ambitious administrators of average ability can always be trusted to sabotage an organization for dubious reasons, and I rather expect they were finally removed from power for mismanagement that went far deeper than just a mistrust of Yeong-sil's clock designs.

That's another point of disappointment. Never mind how the extent to which Yeong-sil's clocks provoked geopolitical crises was just plain absurd. As the epilogue demonstrates, Yeong-sil invented lots of objects besides clocks that no doubt had very interesting scientific and practical explanations and yet...time and again writers Lee Myeong-hee and Ma Chang-joon found ways to steer the story into the same persecution complex again and again.

Although really, presentation is the issue as much as anything else. "Jang Yeong-sil - Drama" is the rare historical project that might have come off more accurate if it had been produced by one of the mainline commercial networks. Is it improbable that Yeong-sil the low-born scientist would strike up a romance with a bastard princess? Yeah, but we can't prove that it didn't happen. And besides, So-hyeon's presence in the story as written just ended up being very superfluous. If Yeong-sil's greates memories in life are doing science with his friends, we really should have got a lot more of that and a lot less uninspired scheming from the antagonists. In these ways and more, "Jang Yeong-sil - Drama" has been a major disappointment.