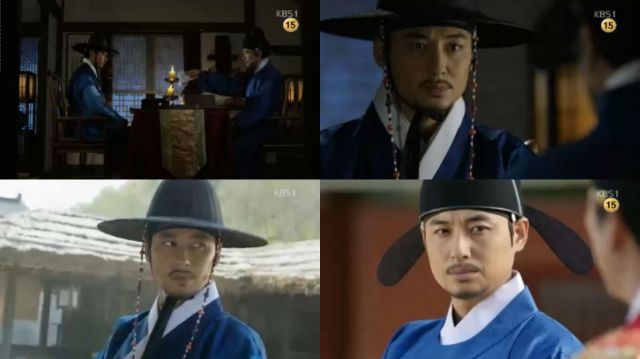 Yeong-sil continues to struggle with authority this episode, as the climax involves him getting into a violent altercation with an official and eventually using the power of science to spring an elaborate trap. As good as Song Il-gook is at action scenes, I can't help but find it a tad absurd how "Jang Yeong-sil - Drama" is apparently taking the position that Yeong-sil could have or should have used his scientific abilities to win fights. That much sounds like a running sketch idea for a late night comedy program.

Matters aren't helped by the tone whiplash. In addition to action scenes, we also have rice riots. While the rice riot isn't an exceptionally graphic scene it does feature people getting stabbed as the peasantry gets into a mad rush for food and, you know, while I get all of this was happening at the time, most of the background we're getting in "Jang Yeong-sil - Drama" is getting to be increasingly incidental to Yeong-sil's story.

I'm having more trouble making sense of the palace scenes all the time, for example. I think King Sejong (played by Kim Sang-kyung) is the King right now, but it's hard to tell because King Taejong keeps walking around wearing the exact same red robes, owing to the weird political situation where King Taejong abdicated even though he still held most of the actual power. It's times like this where I wish there were better places to learn about Korean history than from watching Korean dramas.

That much is mostly due to genre convention. In addition to action and rice riots, there's also awkward pathos as we have to endure extended death scenes. "Jang Yeong-sil - Drama" keeps trying to be a character-driven drama even though the only place Yeong-sil could possibly end up is as a successful scientist. I feel like that should really be the actual focus of "Jang Yeong-sil - Drama", rather than all of this extraneous plot.

Am I going into "Jang Yeong-sil - Drama" with unreasonable expectations, wanting it to adhere to that standard? Possibly- but the thing is, the parts of "Jang Yeong-sil - Drama" that engages with science are in fact by far the most entertaining aspect of the program. The whole thing with the water wheel looks like an elementary school science project, and it is, yet at the same time all of this is really important because as noted, accurate portable timepieces don't really exist yet. That's pretty interesting on its own without having to drag Joseon officials in as the bad guys.