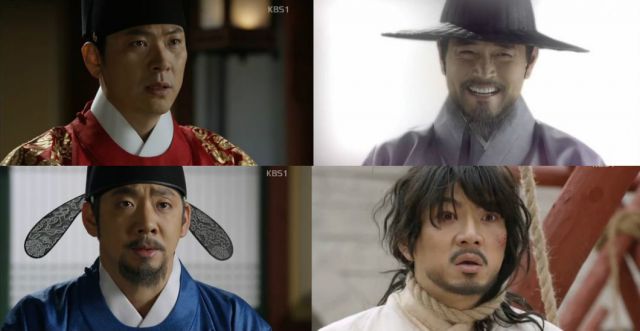 I'm increasingly getting the sense that "Jang Yeong-sil - Drama" is less about the actual titular scientist and more about the political struggles that were necessary for King Sejong to manage the important reforms that marked his reign. It's clear that several of the events we see in major focus were actual real historical watermarks in King Sejong's early career (he's still not actually King yet). Although this is mostly a hypothesis on my part since once again Jeong-sil has very little screentime in his own story compared to other characters who aren't very good at staying alive in difficult historical times.

The relationships are useful comparison points when put in better focus. The big meeting between King Taejong and King Sejong is significant because King Sejong is saying all the things that other characters have almost certainly wanted to say in front of King Taejong. The reason they don't is because they're too terrified of the older man. Even when King Taejong isn't physically in the room his presence intimidates just about everyone.

One problem with this, though, is that "Jang Yeong-sil - Drama" can't exactly do much with the element of surprise. Even assuming you don't know anything about Korean history, the fact that Yeong-sil survives is pretty much a complete given because he has yet to accomplish any major scientific achievements. Ditto with King Sejong, for that matter, which is why it's not all that suspenseful to see them being put in any kind of dangerous situation.

That puts a lot of stress on the drama's more philosophical elements, and once again, this thematic emphasis runs afoul of the fact that very little of the conflict between King Taejong and King Sejong has anything to do with Yeong-sil. While it's certainly conceivable that Yeong-sil could have faced persecution under King Taejong's reign, Yeong-sil frequently feels helpless and alone with his own thoughts. That's not a good place for a drama protagonist to be.

The science remains the main bright spot of "Jang Yeong-sil - Drama", and even that much remains a very distant story element. While I did like the way Yeong-sil was able to use science to gain a better grasp of his location and general situation, this isn't information that matters much in the long run. What's more, Yeong-sil's fate is still left completely up to the stars. That's an odd contrast given how from the royal perspective, the current political troubles are the consequence of stubborn men.