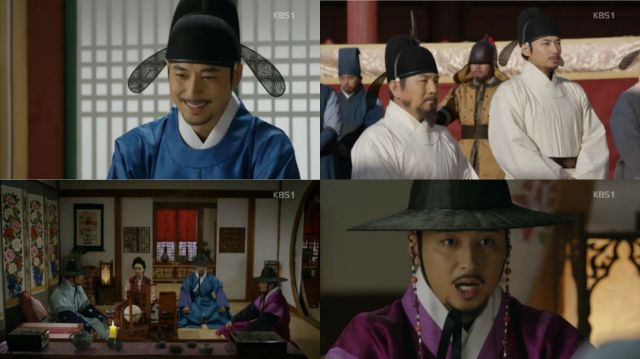 The extended opening of this episode is simply a direct continuation of the cliffhanger from last time. Yeong-sil is stuck in a noose, reliant entirely on the whims of the weather to confirm whether or not his heretical scientific theory is true and thus, can release Yeong-sil from the risk of death. For all of King Taejong's established authoritatiran attitude I'm still at a bit of a loss as to why he takes these issues to such a ridiculous extreme. It's almost like King Taejong takes issues of bad science personally.

King Taejong talks a lot about politics but unfortunately his motivation elsewhere is hard to parse. The main problem with "Jang Yeong-sil - Drama" is its lack of proper cohesion. Thematically this drama is about politics but literally it's about science. While these two fields have had plenty of interaction over the course of history violence tends not to be involved, which is what creates some of "Jang Yeong-sil - Drama"'s most awkward imagery.

In this case, the big moment when the sky finally manages to clear up. There's the beautiful graphics and the lovely bagpipes music and everyone is staring in wonder at how Yeong-sil has managed to prove himself a prophet through the strength of his learning. And then, inevitably, we have to turn back to a major character suffocating to death. "Jang Yeong-sil - Drama" is constantly trying to be morbid and inspiring at the same time and the combination just is not a very good one.

The good news is that the middle event of this episode is a major historical event- one that will hopefully put an end to the question of King Taejong's violent statecraft since the end result is that Yeong-sil now has an established position where he can now do more focus on actual science. This is much more appropriate political commentary for "Jang Yeong-sil - Drama" to engage in, since among other things it will give Jeong-sil more time to interact with So-hyeon- an alleged main character who has yet to do much of importance.

I feel a lot of the time like I'm kind of mean to "Jang Yeong-sil - Drama". Truthfully the production does have lots of merits- they're just distributed in a very uneven and unsatisfactory way, mostly because the drama chooses to focus on the royal intrigues. While more dynamic from a historical point of view, I started watching this drama because I wanted to learn more about early Joseon science. Fortunately there's enough time left for us to still get decent exposure to that.