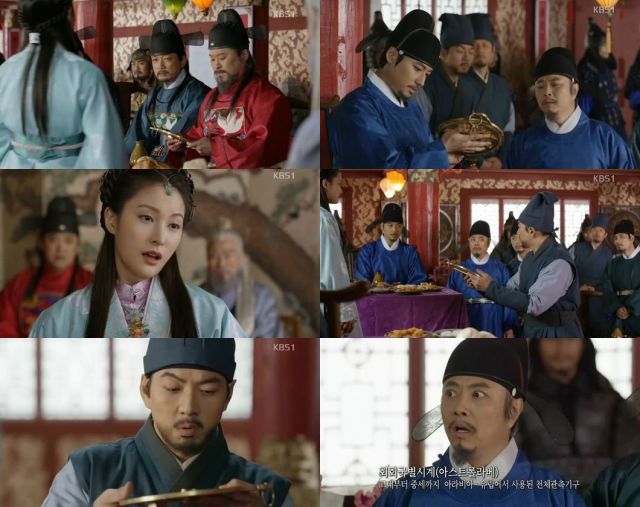 Having finally managed to escape the cutthroat environment of Korean politics, so that he can study astronomy in China, Yeong-sil at long last manages to arrive in China to discover that...there are also violent bureaocratic elements at play in Chinese astronomy. And much as was the case in Korea, Yeong-sil has only the faintest awareness of what's going on. He just expresses surprise and curiousity regarding a few novel scientific devices, and proceeds to stumble clumsily into more random death plots and sword fights.

The worst of it, from Yeong-sil's perspective, is that he doesn't really have any friends in China, so there isn't even any kind of rational hope for rescue. Irrational hope? Well, that's where the episode closes, as we're left a little baffled as to which characters are acting under which motives, when for most of the introductions these people were just acting diplomatic and doing the best job they could of not actually explaining whatever their real goals happen to be.

About the only real advantage China has over Korea for Yeong-sil is that at least he doesn't have to take all the threats against his life personally. At this point Yeong-sil's main antagonist is a man who does at least bear to gain some professional advantage by going after Yeong-sil. But I'm still not totally sure what to make of the fact that "Jang Yeong-sil - Drama" continues to think that pretending to be a high-action political thriller is somehow as satisfying as just watching Yeong-sil do science.

Pay attention, for example, to how Yeong-sil and the other scientists desperately look at the new transnationally developed astronomical instrument that has appeared in China, knowing it must do something cool but not knowing what. Then, when Yeong-sil gains a chance to examine the artifice from a closer angle, he has to struggle a minute with the simple question. Then, finally, we get triumph as Yeong-sil is able to explain what the device does in relatable terms, just as it slips from his grasp.

"Jang Yeong-sil - Drama" is always at its best when it's dealing with this sense of discovery, because I am always there with Yeong-sil when he wonders what this new object is. It's considering the scientific properties of fireworks that's in many ways just as interesting as fireworks themselves. Moreso, conceivably, since gunpowder is normally seen as a weapon of war, yet it is also a scientific marvel in itself. Swordfights, by comparison, are just about everywhere.