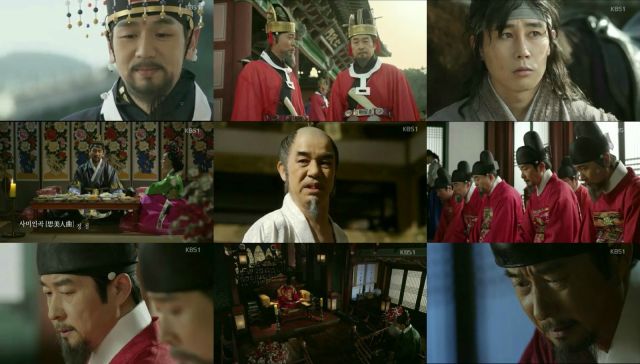 Those of you expecting "Jing Bi-rok" to be "The Admiral: Roaring Currents" in long drama form should temper your expectations somewhat. Yi Sun-shin hasn't shown up yet. I'm not sure he's even been cast, actually, so high-stakes naval action will probably be a long time coming. But worry not- "Jing Bi-rok" at first glance, definitely looks to be exploring the most interesting thematic element of "The Admiral: Roaring Currents"- how the Korean government actually kind of sucks and may not be worth saving.

So far there's two main factions of Koreans we see. First, the ones that live in the capital and flank the King, spend most of their time engaged in extended political discussions. They're very ritualistic. The other Koreans are the ones who live on the local level- in the south and the west. These guys are learning, to their increasing alarm, that the Japanese appear to be planning something big. And sure enough there's a big battle. Although it might be more accurate to call it a slaughter.

The comparison between the Korean and Japanese governments is pretty striking. Whereas Koreans on the official level struggle to get anything accomplished, the Japanese almost immediately manage to kill a dude and start their ambitious attack while the Koreans don't even know what's going on. There's no heroics here mainly because the Koreans who know what's happening lack the power and influence to set up any kind of a counter-attack.

Those of you who get queasy racist feelings about the portrayal of the Japanese, well, that's pretty unavoidable here. Honestly I kind of doubt even Japanese people would try to pretend like the late sixteenth century invasions were in any way noble, so it doesn't bother me that much. Personally, the main barrier to entry here is the scale of the names. Subtitles frequently flash up to explain who certain characters are, sometimes on multiple occasions for the same character. There's a lot to keep track of here.

I get the impression that this is because "Jing Bi-rok" is a drama at least partially in the mold of a pseudo-documentary. It's based on a historical document, which means that all of these people are probably names you could look up in a history book. Well, not you personally. Korean people could. There's not so much information available about these guys in English. That might limit the drama's appeal somewhat to an international audience. For the moment though, "Jing Bi-rok" is definitely engaging enough on its own production values and thematic merits to warrant further attention even for those of us without the right historical background.