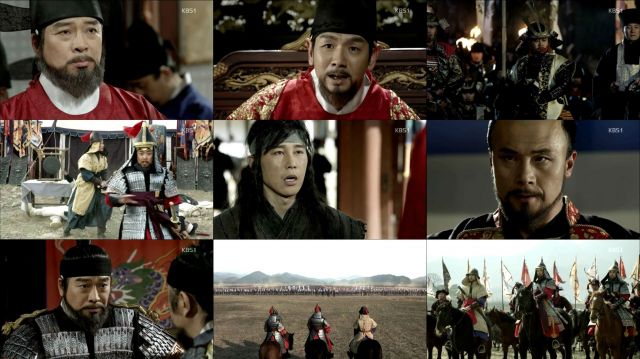 We take a brief break from the actual Japanese invasion to focus on the reaction of the Korean government. As expected, King Seonjo is taking the situation rather poorly. Everyone is, really. But the worst of it is knowing that none of the people in political power have any real idea of what's happening. They're learning about the invasion through information dispatches. And the biggest problem soon identifies itself not as the Japanese persay but rather mass desertion on the part of the Korean forces.

It's moments like this that I often think back to discussion regarding "The Admiral: Roaring Currents" as being a rollicking patriotic flick, owing to the ending. The fact that "Jing Bi-rok" goes into such relentless detail here about poor troop morale, and will no doubt continue to do so for quite some time, is a pretty strong counterweight to that point. Cowardice was the rule rather than the exception in this war. Except for the Japanese.

And it's also odd how even from the other perspective we frequently get Japanese commanders looking rather pensive. It's not that they're in any serious danger of losing- far from it, everything is going splendidly, and Hideyoshi is most pleased with his dispatches. It's more that it's difficult to justify wanton slaughter apparently for the sake of wanton slaughter. There's nothing in sight here that can really be called a greater good.

Even the more heroically portrayed Koreans aren't really given any kind of complex characterization here. They're simple men with simple motivations- at least try to slow down the ever-impending wave of death in the hopes that tactical considerations will eventually give the Koreans the chance they need to devise some kind of counterattack. These men are fortunate enough not to know that back in the capital a coterie of women are struggling to solve such basic tasks as simply getting King Seonjo to wake up from fainting spells.

"Jing Bi-rok" has the usual minute political pacing- which is appropriate, given that wars are never over with in the course of a few days. Although that really just begs the Korean ineptitude in this crisis situation all the worse. Even now the best ideas they can come up with mainly just involve brutalizing their own people- this too, likens back to "The Admiral: Roaring Currents", where Lee Soon-shin had little other recourse but to try and burn out terror by using other terror. All the same, "Jing Bi-rok" is definitely a drama where you can miss an episode or two and not really lose anything essential.