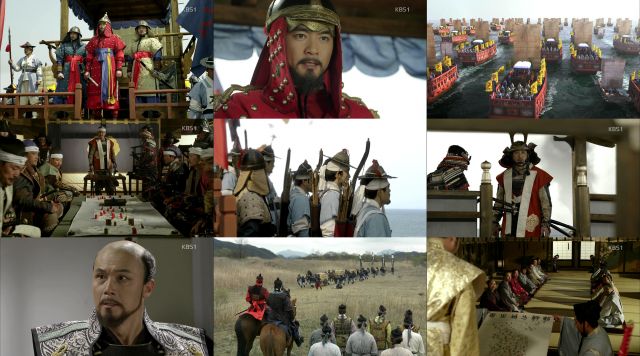 As the opening helpfully reminds us, again, what this war is actually about is the wishes of the people. The Koreans do not do a very good job of managing this. But the Japanese do even worse, as we early on get a shot of a rather abrupt, messy, and probably unnecessary execution. I try to give "Jing Bi-rok" credit on the racism question but that whole bit was just a tad over the top. Even if we are eventually moving to a comeuppance- knowing the overall thrust of the story doesn't make it any less awkward in the moment. Well, most of the time anyway.

The greater theme of "Jing Bi-rok", at least for the moment, is that of hubris. The Korean political personas don't really negotiate with each other so much as they state ideas, and refuse to consider the possibility that they're wrong even as this war to date has consisted almost entirely of terrible mistakes. Perversely, we've actually seen several of the more positively portrayed characters as suffering from the perception that they themselves exercise hurbis, even when in the long run they end up being correct.

But success has now done the same damage to the Japanese. The commanders think that long-term victory is such a definite assurance at this point that they fail to even consider the possibility that some Koreans somewhere are sort of competent. In the field, this just involves the Koreans setting up more ambushes in unsustainable circumstances. That much the Japanese can brush off.

Lee Soon-shin is no such circumstance. Those who quibbled with the way "The Admiral: Roaring Currents" portrayed naval combat will find nothing to complain about here. Just as in history, the Japanese strategy is to force hand-to-hand combat, whereas lee Soon-shin puts all that artillery practice to good use. The result? A fabulous Japanese rout where they can do nothing but stammer in fury, demanding the name of the enemy commander who just made a mockery out of their fleet.

Bit by bit the focus in "Jing Bi-rok" is moving away from the political maneuvering and more into military tactics. Given the overall story of the war, as well as the fact that there's still plenty of episodes left to go through, this isn't something we can expect to last forever. For the moment, though, the drama's definitely acquired some much needed pizazz in the form of combat with ends that aren't necessarily depressing.