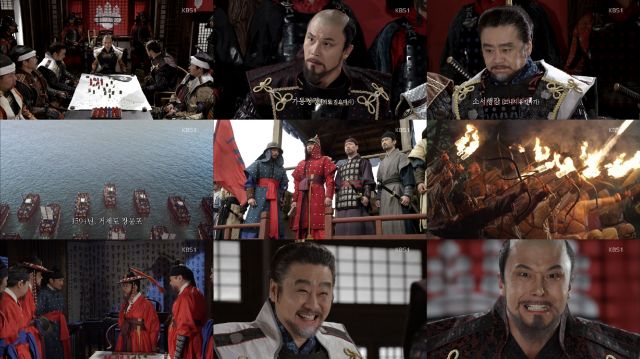 Unfortunately he's also just that- an admiral. As we are frequently reminded, while naval warfare is an important part of the Japanese invasion, at this point the big issue is the presence of Japanese soldiers on Korean soil. Just because they control a relatively small portion of the overall peninsula doesn't make them any less dangerous. Just as Hideyoshi has had his spirits restored by a new son, the Japanese are slowly gaining bolder.

The international antics this episode are mainly between the Japanese and the Chinese as a consequence. And I find myself wondering what the source material for this part of the story is. The Japanese seem just a tad devious here- it's hard to believe that they've been recovering from setbacks lately, because their bluster certainly makes it seem like they're disproportionately confident. Not everyone is, of course. I just have trouble seeing how this could possibly work out in the long term once their intentions become clear.

Elsewhere the situation with Gwanghae has finally reached a boiling point. Gwanghae decides to take a huge risk. In many ways this was a necessary risk to take. The problem of King Seonjo only being told what he wants to hear is a big one, and even Seong-ryong is reluctant to push too hard because he might find himself outside of the royal court again, and even less able to influence policy at this very important juncture.

But the bigger issue here is simply that King Seonjo isn't playing statecraft. He's playing Go. While the game of Go has plenty of depth, at the same time its dimensions are too simplistic and the analogy for these real world problem just isn't a very good one. The situation hasn't completely degraded just yet. Even so, Korea appears to be standing at the edge of a precipice. The worst part is that the leaders should know better by now, and yet a necessary shake-up does not appear to be forthcoming.