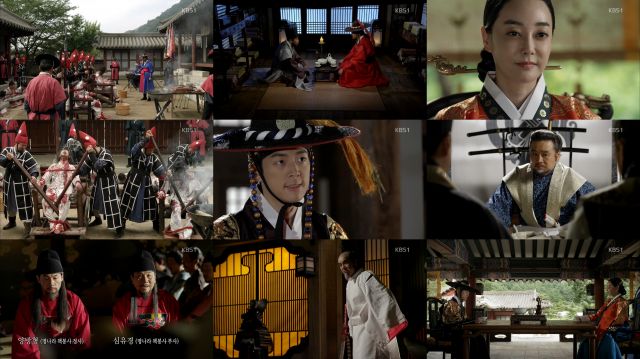 Seong-ryong has tried to step into the role of conflict resolution- and it's not really working out all that well. The main issue is that while ministers have very fervent discussions about maybe doing something in the immediate future, meanwhile, people are still being brutalized out in the torture yard. The year is 1596 and this is still the best solution anybody can come up with to internal problems. At this rate it seems like the Japanese are going to invade again because the Koreans have learned absolutely nothing from the awful early times of the war.

That interpretation is just metaphorical, though. On the literal level, it looks like the Japanese are heading into war because their own negotiations with the Chinese aren't going well. Interestingly, things seem to go all right when it's just the diplomats. The Japanese characters represent a fairly broad cross-section of personalities. It's just that the ones with the most influence are also the ones most likely to brandish their swords at inopportune moments.

Now, it should be noted that the peace negotiation between the Japanese and the Chinese is rather obviously not being conducted with the interests of the Koreans in mind- they're too busy torturing their own people to pay much attention to what's going on with the diplomatic angle. Which is really just part and parcel. Even if torture and diplomacy don't literally require the same resources, a government that's focused on doing one isn't going to the other very well.

And throw war into the mix too. When it gets right down to it Hideyoshi doesn't really want a peace settlement because he doesn't really want to coexist. The goal of this war was to bring the known world under Japanese domination. The Chinese have a mostly coherent goal, but because they're dealing with irrational actors they're not really a whole lot they can do about attaining this goal except just hope they're meeting with the Japanese on a lucid day.

It's often written that Korea historically held a minority position in East Asian politics, being stuck between the more powerful Japan and China. But outside of this one war that's never really all that relevant to the Korean identity. Even in the context of this war the Koreans are much more focused on internal issues than what the Chinese and Japanese are doing. East Asian politics in antiquity was mostly about trying to manage coexistence, and "Jing Bi-rok" is a pretty good explanation as to why- nationalist banner-waving just makes doing anything else really hard.