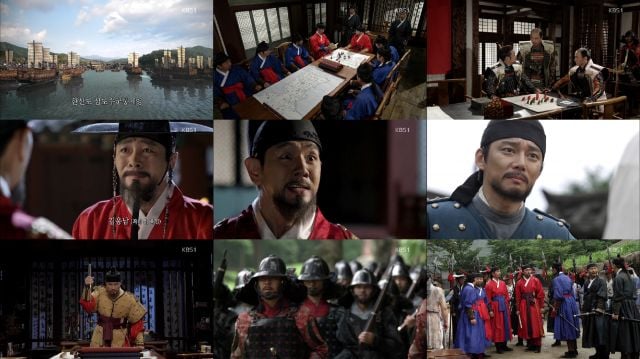 We learn this episode, quite predictably, that bravado is no substitute for competence. We don't see that much of the naval battle, but what we do see indicates a complete rout on the part of the Japanese. There's nothing standing between them and the rest of Korea. The situation's so bad that when the Chinese show up King Seonjo is actually glad to see them- all previous disputes now being forgiven. Unfortunately, that's probably not going to be enough here.

Well obvious it will be enough since the Japanese don't succeed in the long run. But it's like Seong-ryong says- at this point they can't even seriously expect Lee Soon-shin is going to be able to save them. The problem with being an admiral is that you kind of need boats in orders to do that job very effectively, and the Japanese managed to destroy pretty much the entire Korean navy.

Even so, as obviously terrible as morale is, and with the overall conflict at such a low point, one fact yet remains. Everyone still has a really high opinion of Lee Soon-shin. For all the torture the admiral doesn't look all the much more worse for wear. Of course, given everything that's happened Lee Soon-shin is probably putting on a strong front for the men. As hopeless as the situation may be he can't let them see that, not as long as a chance remains to make this right, however slender it may be.

It would appear that the final two episodes of "Jing Bi-rok" will be heading for genuine heroism. Thank goodness. I can get criticism of "The Admiral: Roaring Currents" on some level- yeah, the movie was kind of patriotic. But given how the entirity of "Jing Bi-rok" has been an exposition of double-dealing and incompetence, who wouldn't want to focus on the good stuff? We just got through an exhaustive plot arc that mainly just established that yep, King Seonjo hasn't learned anything.

This is the time we should be thinking back to the very first scenes of "Jing Bi-rok", where an obviously ill Seong-ryong is making a point of writing down the chronicle of what happened. Where other people see the joy of victory, Seong-ryong remembers the sadness that rendered this joy necessary in the first place. In the end "Jing Bi-rok" most likely will be a eulogy to Lee Soon-shin- he never had to know precisely how dysfunctional his government really was.