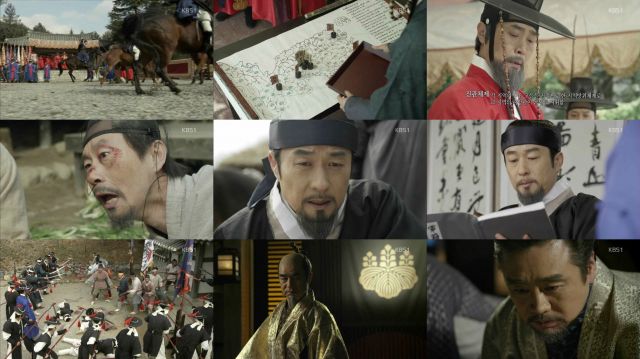 What really makes Hideyoshi interesting here is, paradoxically, how very hard it is for any of the other characters to understand him. It's not just a matter of the cultural or language barrier. Hideyoshi is genuinely just kind of a weird guy. Even the other Japanese characters aren't really sure what to do with him. They just know Hideyoshi holds all the power, and is prone to having people murdered right in front of him if they say something he considers to be displeasing.

It's a very odd fact to take in in the modern context. Every two-bit pundit and blogger can tell you in extended detail about Obama's personality or Putin's odd quirks. Obviously these are just random guesses, and we can never really know what kind of a person Obama or Putin really are. But that's just the point. We can guess about these modern leaders because they use modern communication technology to broadcast their messages all over the world.

By contrast, most of the characters in "Jing Bi-rok" don't even know what Hideyoshi looks like. And security matters are such that it's hard to imagine he'll ever have an actual direct conversation with King Seonjo. The drama has been very good about demonstrating just how difficult diplomacy used to be back when there was no easy way to gather intelligence. Practically everyone is feeling around blind- except that Hideyoshi is feeling around with his sword.

It's becoming increasingly obvious that the main reason why the situation keeps getting worse in "Jing Bi-rok" is just a simple failure to communicate. I feel especially bad for the general Korean peasantry. It's obvious that they're scared, panicked and lashing out mainly because they have no idea what's going on and nobody seems to want to explain it to them either. There's just soldiers, Korean ones, who act more like bullies than protectors of the people.

Seong-ryong does whatever he can to help, but unfortunately he's not a military figure. What's more, his calm, cool personality is very much not the kind that gets to decide decisive historical moments. At best he's able to document the mess that unfolds right before his very eyes, an ominous portent of the horrible failures to come. It's from this context that we have to appreciate the eventual arrival of Lee Soon-shin- if "The Admiral: Roaring Currents" is any guide, it seems quite likely the legendary general paid close attention to "Jing Bi-rok" as a document of things not to do.