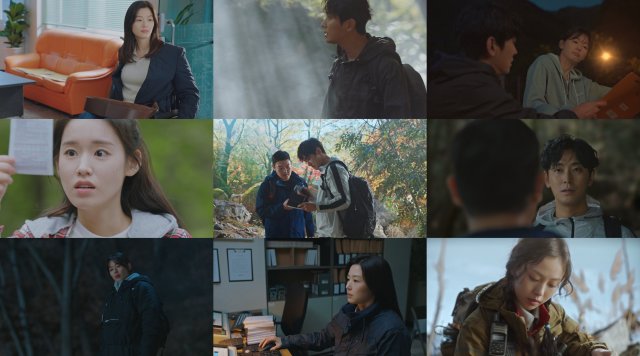 In a somewhat confusing continuity decision, "Jirisan" now has a present day story and a past day story. In the past day, Hyeon-jo is still a rookie park ranger who I-kang patiently endures in spite of his bad professional decisions. But in the present day, Hyeon-jo is in a coma while I-kang is in a wheelchair. Apparently they were ambushed somehow in the winter of 2019, by an entity that may or may not be supernatural in origin.

I'm honestly not sure what "Jirisan" is going for in terms of genre. Most of the time it's a completely sincere story about park rangers and the kind of work they do on a day-by-day basis, whether it's dispersing mobs of hikers or confronting suspicious people in off-limits area. Then there are flash-forwards to 2020, or references to Hyeon-jo's apparent visions of unfortunate events that are happening in parts of the mountain he couldn't possibly know about.

The more down-to-earth sections of "Jirisan" are by far the most engaging. Take the giant memorial service, where an annoyed I-kang attempts to keep track of everyone's pancake orders at her familial liquor and pancake shack. That's a Korean culture thing by the way. Very common in mountainous areas. There's also the first explicit reference to Jiri Mountain's location- in the southern part of the country. Which makes it an odd place for Hyeon-jo to want to go, since he's from Seoul and there's another similarly sized mountain in that area, Bukhan Mountain.

Beyond worldbuilding there's also the exciting world of mountain crimes. I was a bit annoyed that Hyeon-jo fell for the trap. My main issue was just that the bad guy's plan didn't really make sense, and only works if Hyeon-jo acts like an idiot. Hyeon-jo knew the suspicious bits of the story before going up the mountain again. It seems like he must have violated a lot of regulations by not telling the other rangers what was going on and consulting with them.

The more gimmicky aspects of the narrative just make the rangers look less competent, since actual rangers have to make do without the use of magic. Compare that to I-kang identifying an unusual tree, and using that information to make deductions about how and why it appears in a particular location. But there's only so much naturalist storytelling that can be done in eighty minute episodes, requiring awkward stretching of the plot as necessary.