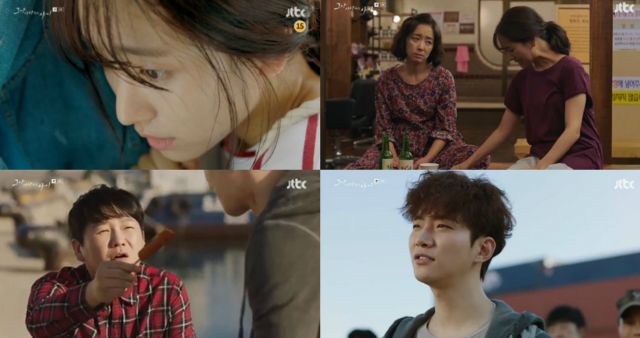 At first glance, "Just Between Lovers" is a typical romance. You've got the woman, Moon-soo (played by Won Jin-ah), who suffered through a horrible tragedy in her teen years, and now struggles to keep her family together economically and emotionally. Then you've got the man, Kang-doo (played by Lee Junho), with a similar tragic backstory who is...wait, he's not rich? Kang-doo is just a working class construction worker who lives in constant rage about how the world is fundamentally unjust? And he hangs out in the foreigner districts?

"Just Between Lovers" has something I have not seen in a drama in quite some time - class consciousness. I mean sure, "Awl" was literally a drama about union organizing, but then that was the focus. On the job. Kang-doo doesn't think in terms like that. To Kang-doo, the job is functional. He makes money, and maybe can prevent future tragedies from happening. But the people who run the operation should never be trusted. Especially if he doesn't like their attitude.

There's an obvious metaphor in the backstory about how the building was structurally unsound. Actually, the entire system, specifically the system that constructed the building in the first place, was structurally unsound. Kang-doo has no faith in his capitalist overseers to treat workers or consumers as anything except disposable commodities and his actions, however self-destructive, reflect an essential belief that it's better to destroy himself than let others destroy him.

Now, Moon-soo, she's nowhere near as far gone. As an architect, Moon-soo believes that the system is sound- even as she struggles through poverty because architecture is not a high demand profession. Moon-soo understands fear as being inherently irrational- not that this ever stops her from always taking the stairs. Fear, once learned, is nearly impossible to unlearn. It always comes back in nightmares after all. That much, Moon-soo and Kang-doo have in common.

I really liked how "Just Between Lovers" starts out by making Moon-soo seem miserable, and then Kang-doo shows up and we see almost immediately that he has it even worse. Yet for all its tragic undercurrents, "Just Between Lovers" is never anywhere near maudlin. It's characters are just too well-drawn and easy to relate to for that. We want them to succeed but neither we nor they have any idea what success means. We may know from the title alone that Moon-soo and Kang-doo will get together romantically, but it's unclear whether even that happy ending can solve any of their problems.