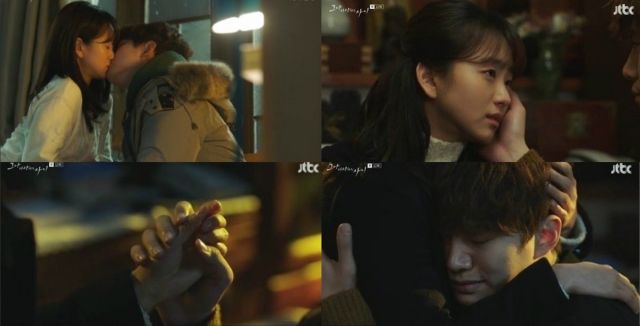 At long last Kang-doo has come to the conclusion that he is in fact an idiot and badly underrating himself. Not only does he allow Moon-soo to start caring about him without needlessly pushing her away, Kang-doo goes even farther than that and admits that he cares about her, and wants their relationship to go back to the way it was. As in, they just make a point of seeing each other on a regular basis, sometimes with a specific goal, and other times just for fun.

I really like the way Lee Junho smiles, by the way. It's special because we almost never see Kang-doo smile because he never wants to be happy. That's the big part of his realization here that's so important. Being happy first requires that you want to be happy. This is admittedly not an easy task when a nasty flashback can come up at any time and bring Kang-doo back into self-hatred mode but still, he needs to start with that effort.

This is something that Moon-soo has largely mastered. Her scene with Wan-jin at the sauna is great, even as it reminds us of why Moon-soo's mother has been unable to make a recovery. Like Kang-doo, Yoon-ok doesn't really believe she has the right to be happy. It's the main source of friction between Yoon-ok, her husband, and daughter, is that they were willing to move on. Yoon-ok has never really thought in those terms.

Bear in mind that moving on is not the same thing as forgetting it. Aside from being together with Kang-doo, Moon-soo's main motivation has been to erect a proper memorial. Even Dong-cheol, for all his limited screentime and even more limited vocabulary, has a big moment here when another character inadvertently reminds him of the factors that led to the death of his second daughter. Essential as trauma is to Moon-soo and Dong-cheol, it does not define them.

It's against this backdrop that the romantic scenes between Kang-doo and Moon-soo are so powerful. We see them from the context of all the difficulties they've been through in life, and see that for all that, they can still be happy. Even the prospect of a suitably tragic ending isn't enough to dampen these moments of happiness, because that's a lot of what Kang-doo's character journey has been about. You can't just dismiss happiness as a concept simply because inevitably, the day will come when you are sad again.