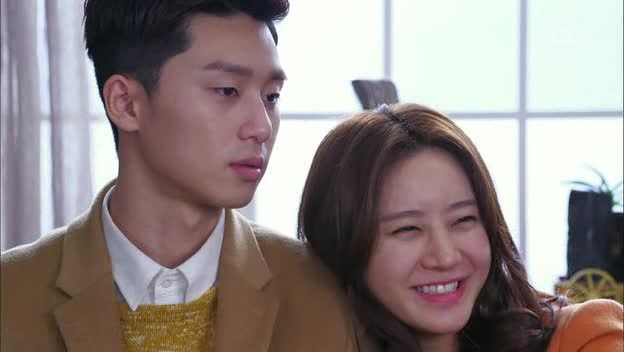 What makes "Kind Words" such a strong show is that despite a few plot tricks, the character growth is steady, on-the-mark, and endearing. These are real people, suffering real hardships, and making decisions that we, the viewers, face everyday. It's relatable even if our sins are not those committed in the show.

Let's start with the plot tricks. "Kind Words" has a way of engineering the plot to foster coincidences and then subverting that expectation. When Min-soo was looking for a place to stay, it seemed as though that place would be Eun-jin's father's building. It wasn't. There have been numerous almost meet-cutes and not-so-meet-cutes, especially regarding the discovery of the relationship between Min-soo and Eun-young's families. While a few of these are okay, the game is starting to get tiresome. It would've been better had a few of the "almost-meets" been avoided. Another one of those moments has been engineered at the end of this episode and I hope it plays out.

The strength of this show is the relationships. Eun-young and Min-soo are honest with each other and don't take their differences and the tactless things said because of them in the wrong way. Seong-soo and Eun-jin are working through their fractured relationship with the wisdom of 20/20 hindsight vision and understanding. Jae-hak and Mi-kyeong are still incredibly self-involved with their pain and misunderstandings of each other. Three very different relationships that allow for so much character exploration. All three change depending on circumstance and vacillate in a believable manner. It makes me very curious to see how Eun-young and Min-soo will change once the truth is revealed. Will they be resigned to fate? Will they work through it like Eun-jin and Seong-soo or like Mi-kyeong and Jae-hak? Or will they continue to have the openness that I love about them.

What is difficult to reconcile between the realism of the show and the fact that it is a television show is the fact that people are maddeningly variable when it comes to how they feel, just like Mi-kyeong is. However, watching that on television for a prolonged period of time is equally maddening. If Mi-kyeong had anymore mood swings, I'd go crazy. "Kind Words" seemed to know this and gave her a new path to follow this episode. Her husband, Jae-hak, is equally infuriating in his selfishness and lack of awareness of others' feelings. The flashbacks showed us that he was the same way with Eun-jin. Luckily, Min-soo got involved and informed him that he is being selfish. Whether or not he will act on it remains to be seen. But I'm glad it was said. Much more of this stubborn couple would've been too much.

Along with the stubborn couple goes the stubborn, cruel, naggy, nitpicky, but kind-at-heart mother-in-law. She is Jae-hak's mother and the person who nagged and bossed Mi-kyeong around for twenty years. She's been a thorn in Mi-kyeong's side and also in the show's side. She is hard to relate to as a character although the show tries to make her endearing. Again, however, her development is consistent and on a psychologically understandable path. Despite my dislike for her, she's well written and wonderfully acted.

It's time for the real angst to hit when Min-soo and Eun-young's family truths are discovered. Without their happiness, there will be little happiness in the show until some reconciliations and solutions are set into place. But the show has prepared for that moment and so have I. Bring it on.