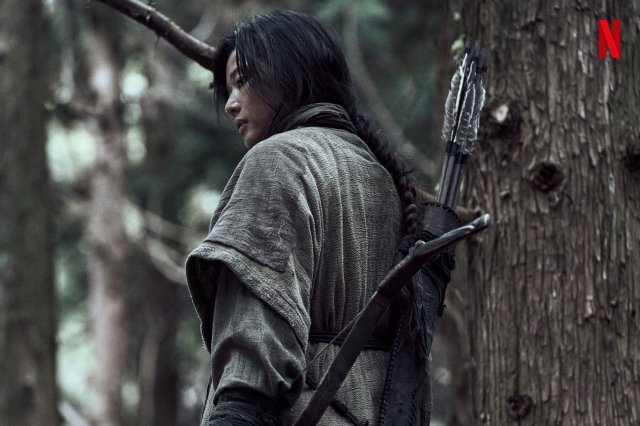 The purpose of "Kingdom: Ashin of the North" is straightforward enough. The Netflix special, really just a movie for all practical intents and purposes, seeks to explain the identity of Ashin (played by Jun Ji-hyun) who appears at the end of "Kingdom - Season 2" and is implied to be a character of great importance mostly because she's played by Jun Ji-hyun. "Kingdom: Ashin of the North" is...not as useful in that regard as I would have hoped.

The main issue is that "Kingdom: Ashin of the North" takes place on a much longer timescale than I was expecting. Mostly the story is about Ashin as a child (played by Kim Si-a), who's recentful of the racial tension inherent in her border village. That zombies exist at all is weirdly irrelevant compared to this diplomatic situation. A zombie tiger is the catalyst for a great deal of death that's being exploited for some arcane political purpose I couldn't quite figure out.

And I hate to be picky, but a zombie tiger isn't exactly that much more threatening than a regular one. While "Kingdom: Ashin of the North" explains the source of the zombie outbreak this information isn't particularly interesting or noteworthy. Honestly, it brings up a whole lot more plot holes than it closes. That Ashin was motivated by revenge makes sense, but by the time we get to the ending it's not terribly clear what she was hoping to accomplish after that.

The charitable reading of all this is that these further mysteries will be explained in "Kingdom - Season 3" which will go into Ashin's backstory even further. But even then, Ashin's motivation as exposited so far isn't exactly sympathetic. We barely learn anything about the villagers Ashin goes to such great lengths to help. The fact that Ashin's plan obviously can't possibly work just makes her seem more dangerous than cool, a practical villain with the thematic trappings of a hero.

Nor does "Kingdom: Ashin of the North" work at all well as a standalone project. Despite the fact that nearly every character aside from Ashin herself dies, there's no real sense of significance or drama to this constant death. "Kingdom: Ashin of the North" is aggressively cynical to no particular purpose. Even granting that "Kingdom" itself was fairly cynical from the outset, there was at least a political power struggle and sympathetic characters caught up in it. The characters had goals, which made the mysteries intriguing since achieving those goals hinged on solving the mysteries.

The grim dark aesthetic likewise contributes to just making "Kingdom: Ashin of the North" seem terribly bleak. Not to mention, it's so poorly lit that even the zombie spectacle is underwhelming. As a final, admittedly petty note, I came away from "Kingdom: Ashin of the North" rather confused about exactly how old Ashin is supposed to be. I had assumed that, much like Bae Doona's character, she was just an older professional specialist, but the script kind of makes it seem like she's in her twenties.