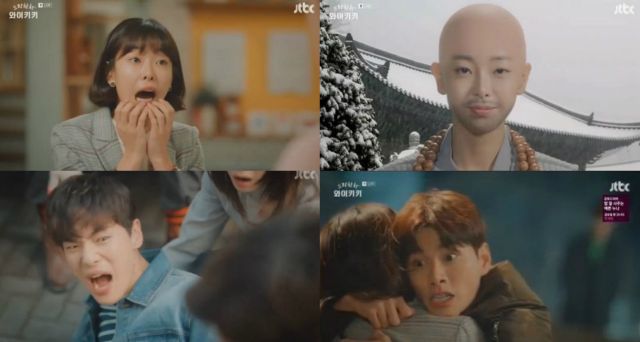 Dong-goo's character is substantially improved here because he's actually trying to avoid being a completely petty jerk for once. I liked the conversations with Yoon-ah, where Dong-goo clearly wants to abuse his power as landlord, but gives up when suitable excuses for trying to keep Yoon-ah away from Joon are not forthcoming. The excuse Dong-goo comes up with in the second storyline is so on-the-spot it's hard to hate him for premeditation. And besides, Dong-goo ends up getting what's coming to him.

Now there's an important element to good comedy that "Laughter in Waikiki" has been very inconsistent about. Comeuppance. When pointlessly zany schemes gradually crash down because of the increasingly elaborate deceit necessary to keep them going, that's funny. Observe how after a certain point, Dong-goo's anger to the prospect of a relationship between Joon-ki and Seo-jin is entirely a function of the complex lengths they are going to for the sake of telling an irrelevant lie.

That Joon-ki and Seo-jin keep managing to screw up the exact same way is also funny, since it indicates that they are not very smart. I also liked Joon-ki's second storyline, where he's trying to do a good job but is incapable largely due to circumstance and struggles to persevere. I like it when characters have clearly defined goals and must put effort into trying to solve them. That way, their success feels earned.

That too is fundamental comedy, and yet I was a bit cool on Soo-ah's scheme to set up an online mall. Mostly this was because her obviously pandering schemes were really dumb and should have failed a lot earlier than they did. I did like the crisis in the convenience store though, what with its unexpected solidarity and equally unexpected turnabout. Still, I can't help but feel like the final sequence would have worked if Soo-ah hadn't been trying so hard to intentionally pander.

Because really, why does Soo-ah want to work in commerce and advertising anyway? From what we see Soo-ah would be a crackerjack police officer. She has been a frequent victim of criminal behavior, has a naturally authoritative demeanor, is good in a crisis situation, and has great reflexes. Best of all, Soo-ah and Doo-sik work really well as a team. I kind of hope Doo-sik wirtes a script based on their experiences together, beause they've got all the essentials for a great buddy cop concept right there.