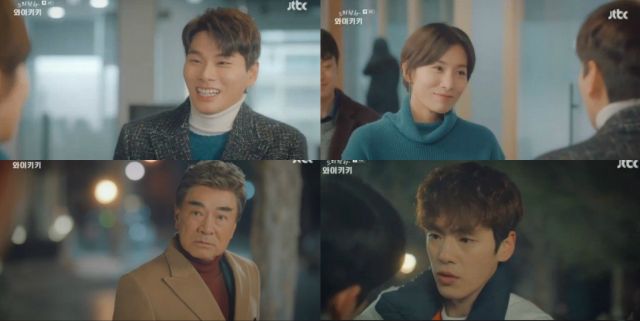 So it would seem that Joon-ki isn't Yoon-ah's love interest at all, Dong-goo is. While this is not bad, by any means, I am mainly just annoyed that "Laughter in Waikiki" probably accidentally led me to believe otherwise through poor use of that subtitle in the first episode. Also there's the whole issue of Soo-ah being listed as a main cast member. Soo-ah doesn't appear this episode, and going forward, it's hard to imagine she's going to have much of a story presence.

Joon-ki does, thankfully, get a regular normal job. Hopefully the rest of "Laughter in Waikiki" will be about him acclimating to regular work with the same people. I've really had just about enough of his being senselessly and meaninglessly humiliated. The only reason that was funny in the first episode was because of the inherent absurdity in the hand gestures. Here it's just lazy gross-out humor, even if we do eventually get a pay-off in the form of exposition with regards to Dong-goo's backstory.

The more serious stuff is actually fairly decent. Yoon-ah gets a job interview, only to realize to her disgust that there were factors at play besides performance evaluation. Unfortunately this storyline does absolutely nothing with the whole set-up regarding the blouse, which makes me wonder why writer Kim Ki-ho bothered with that part at all. More exposition about the interview would have been better, or possibly an earlier joke about the statue.

The jokes in general have gotten very, very bad. Almost all of them are prompted by a main characters acting stupidly and impulsively instead of just being honest with other people about the current situation. I can't for the life of me figure out why Joon-ki and Doo-sik thought it was a good idea to go to the construction site. Even bearing in mind that Yoon-ah's life decisions have been very questionable, they are still her decisions to make. Joon-ki and Doo-sik had, at best, limited information.

Incidentally Yoon-ah has gone from being stupid in a kind of cute way to stupid in a genuinely annoying way. It seems like every other scene she's finding a way to destroy something or offend someone or therwise rack up expenses it's not clear her housemates can afford. Yoon-ah is a frustratingly and unreasonably optimistic character. She abandoned her baby with strangers for an entire day- has the reality of Yoon-ah's situation really not caught up with her yet?